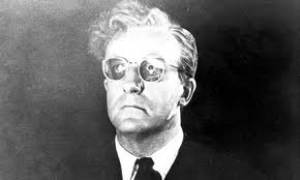 At the height of the Cold War, Stanley Kubrick became obsessed with the possibility of nuclear calamity via human error, and determined to make a strong drama on the subject. He attempted a serious screenplay based on Peter George's thriller Red Alert, but after considering the satirical possibilities, he changed course and employed writer Terry Southern to collaborate on a darkly comedic treatment. Kubrick had used Peter Sellers in his previous film 'Lolita', and cast the British actor with the idea of having him play multiple roles. Sellers was flattered by Kubrick's comparisons of his talent to Alec Guinness, Sellers' idol, Kubrick initially convincing him to play four roles. Kubrick eventually whittled it down to three as Sellers was not happy with his attempt at the Texan bomber pilot character, which then went to Slim Pickens. Kubrick demanded a startling central set in which to film the piece, and designer Ken Adam provided the remarkable and expressionistic War Room set. The set for the cockpit of the B-52, guesswork on behalf of the designers, was so convincing Kubrick was grilled by the CIA as to how he'd gained access to it's secret layout.

General Jack D. Ripper (Sterling Hayden), commander of a US base on British soil raises a red alert, sending out the nuclear bombers and putting the base into lockdown. British Group Captain Mandrake (Peter Sellers) discovers no order has been received form the Pentagon and challenges Ripper, who is patently in the middle of a psychotic episode. The US President, apprised of Rippers action, and has no choice but to call his Russian equivalent and inform him of the imminent attack on Russia. They co-operate to recall all the planes, except the one piloted by Major Kong (Slim Pickens), whose code is damaged and can't receive the recall signal. Kong is determined to carry out his mission even with a crippled bomber, as the Pentagon War Room weighs the options for a post nuclear future and Ripper fends off an attack on his base by US forces. The President and his aides contemplate a post nuclear future, and are given curious food for thought by the eccentric German scientist, Dr Strangelove.

Kubricks decision to show the madness of nuclear war via a bleak and comic prism was a game changer, in that the serious topic of nuclear destruction had never been treated with such irreverence before. Hitler had of course been parodied by Chaplin in 'The Great Dictator', but that was prior to the extent of the knowledge of the Nazi death camps, when Hitler was mistakenly viewed as a buffoon by the west. It would be some time until Mel Brooks took the bold move to lampoon the Nazi's in his wonderful 'The Producers' in 1969, to break down some taboos that had grown around the subject. One of the great powers of comedy, especially black comedy, is to throw a spotlight into areas and to diffuse issues by amplifying the innate stupidity of core concepts, and in 'Dr Strangelove' it's the mad idea of mutually assured destruction.

"Gentleman, you can't fight in here, this is the War Room", is one of the justly famous quotes from the film, uttered by President Merkin Muffley as a scuffle breaks out in the central set. The generals and politicians debate the consequences of a first strike option and the resultant retaliation, "I'm not sayin' we wouldn't get our hair mussed, 10, 20 million casualties tops", claims an excited General Buck Turgidson (George C. Scott). The War Room denizens then consider a new 'super' race rising from subterranean shelters, where the elite men like themselves would be servicing many different women to populate a post nuclear future, a dark parody of the Nazi philosophy. In an Orwellian touch, the sign out the front of the military installation in Britain carries the motto, 'Peace is our profession'.

World War I French President Clemenceau's famous line "War is too important to be left to the generals" is quoted by General Ripper, but the idea is left hanging as to just who it should be left too, as politicians and scientists seem equally inept. American triumphalism is seen in the cowboy attitude of Kong, "nooclear combat, toe to toe with the Ruskies", and the surreal image of Kong riding the bomb like he's at a rodea lingers indelibly. English timidity and overt politeness is also parodied in the form of Mandrake's handling of Ripper, especially in their conversational parries over bodily fluids. "I don't avoid women Mandrake, but I do deny them my essence" says Ripper, and Mandrake barely knows where to look. Events escalate until the war room is seriously discussing the looming "mineshaft gap", a reference to policies at the time promoting massive underground fallout bunkers for millions of people.

Kubrick's ability to handle his actors, and to extract committed and consistent performances from them is often overlooked in retrospect. The fact that such non-comic actors such as Sterling Hayden and George C. Scott could fit so seamlessly into the Sellers dominated, anarchic tone of the film, and to provide such rich characterisations speaks volumes for Kubricks talent with form and tone. All the support roles are filled beautifully and are well realised, particularly Peter Bull's Soviet Ambassador and James Earl Jones flyer in one of the bomber crews. In a minor role as 'Miss Foreign Affairs', the woman who plays Turgidson's mistress is Tracy Reed, daughter of British director Carol Reed! Peter Sellers succeeds in immersing himself in the three characters he plays, Mandrake, Muffley and the title character. Sellers gentle President Muffley on the phone to his drunken Russian counterpart is priceless, "Well Dimitri, how do you think I feel"?! Sellers then provides a career peak with Strangelove, his German accented and single gloved psychotic becoming a figure beyond film and entering the collective unconscious. "Mein Führer! I can walk"! He exclaims, as the bomb drops and Vera Lynn's wartime ballad plays. An alternate ending was filmed and cut involving a pie fight in the War Room, but was dropped before the final cut and the new ending filmed in it's place.

At the time of the films release, the world of cinema was abuzz with the effects and re-invigoration of the French Nouvelle Vague, but the famously dismissive Kubrick was having none of it. Kubrick was already far beyond the concept of 'auteur', into a realm where he controlled the minutiae of everything associated with his productions. He remained in England from then on, making films on his own terms and to his own meticulous standards. Like Miles Davis who probably "changed music" two or three times by his own estimate, so too with Kubrick and cinema. Stanley would turn his gaze spaceward with the next project, and would forever change how science fiction looks and sounds cinematically. 'Dr Strangelove' remains as more than a curio of the paranoid '60's and the arms race, it's a trenchant and cutting satire of man's seemingly endless ability to take careful aim and shoot himself in the foot, one toe at a time.

A masterpiece from a master director. 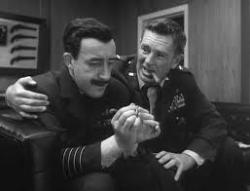 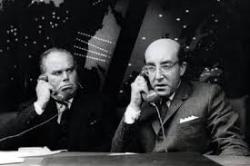 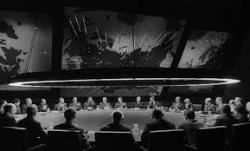 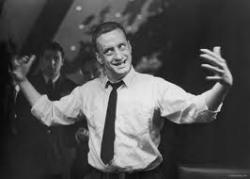 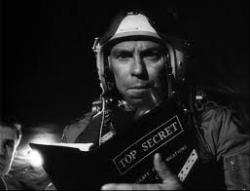 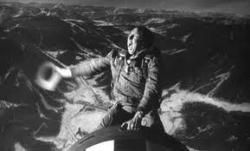 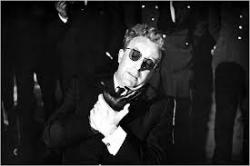