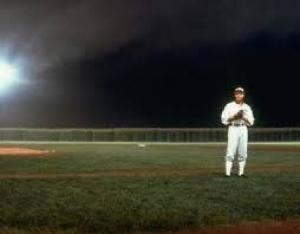 "I'm a big fan of dreams. Unfortunately, dreams are our first casualty in life - people seem to give them up, quicker than anything, for a 'reality.'"
~ Kevin Costner

Phil Alden Robinson’s witty and sweet natured baseball fantasy is not everyone’s cup of tea I’ll wager, but it carries a deep humanism within its diamond shaped heart. To dismiss it as a baseball or ‘sports’ film is to miss the point, it’s about generational estrangement, and the simple but important things that can connect a father to a son and vice versa. Humans build mythology as assiduously as we build any edifice, and Field of Dreams is an example of constructing a dreamlike immortality myth for the 20th century. It’s rare a mainstream film can allude to a profound melancholy existentialism that lurks in our bones, primarily because we’re aware of own mortality, and also entertain, but Field of Dreams works beautifully at several levels.

Ray and Annie are running a small corn farm in the mid west, managing to keep up the payments and provide for their daughter in an idyllic, all-American setting. Ray has gnawing feelings that life is however passing him by, and one day while he’s working the field he hears a voice. He convinces his wife his need to act on a mysterious feeling, and to build a baseball diamond in his cornfield. What begins as a spontaneous act soon threatens the future of the farm given the unproductive nature of the sports field, and Ray is looking at repossession from the banks. Events take an unexpected turn when the eight men banned from baseball for life in the 1919 World Series* match fixing scandal walk out of the cornfield and start to play ball.

Ray is an ageing hippie, a child of the ‘60’s student era anti-establishment generation who fought the good fight and stopped a war in Vietnam through ‘people power’. The urban hipster fell in love with a girl from the mid-west and the couple relocate from the comparatively radical environment in San Fran to a sleepy town in Iowa and to a little piece of agrarian heaven. Field of Dreams is one of the few American films to address the fading hope of the ‘60’s generation counter culture, so convinced they would change the world and defeat the ‘man’, that by the 1980’s, when it’s set, the conservatives are still running the show under the aegis of a B grade Hollywood actor. The film actually admits that every generation has its arc of a journey, from innocence and wide-eyed idealism to pragmatic realisation and maybe even on to cynicism, but the eternal verities that underpin every generation’s progress remain the same.

Alden Robinson cleverly evokes the old counter culture warrior figure in the writer Thomas Mann (James Earl Jones), an amalgam of several ‘60’s hipsters that advocated ‘tuning in, turning on and dropping out’. We also see the couple set to against the conservative ‘book burners’ of the local community, as they re-live the glory days of activism and find a taste for engagement has not left them. The W.P. Kinsella book, Shoeless Joe, on which the film is based, uses J.D. Salinger as the author to whom Annie writes the letter, but Salinger refused permission for the filmmakers to use his name and threatened to sue. Ray Kinsella was a character in a Salinger book, and W. P. Kinsella says he wrote the character of the reclusive author as a very nice person so as not to be sued by the notoriously litigious Salinger.

“Until I heard the voice I’d never done a crazy thing in my whole life”, Ray tells Annie, as Ray gives voice to a fear that is common in the middle-aged, that spontaneity has disappeared and that “I’m turning into my father”. Ray thinks he’s tracking down one path, to “right an old wrong” and realising a ‘dream’ of a sort, but he actually finds his destination to be another entirely. Mann advises Ray that “misdirected passion” is life’s main tragedy, as Ray tries to find a way to connect the fractured components of his past. Ultimately, Ray realises it’s a personal revolution that matters, and the collective concerns take a back seat, this is America after all.

Kevin Costner, who had just completed the excellent baseball themed film Bull Durham, was the ideal choice for the ‘everyman’ overtones required in Ray. Costner captured the feel of the character perfectly, and articulated the lengthy monologues with grace and style. Burt Lancaster gives added gravitas with his heartbreaking turn as Doc Graham, a man who played one game in the major league, and James Earl Jones gives a fine performance as the crotchety writer. (If only he’d said, “Ray, I am your father”…)

From this fertile seed Robinson works his magic, constructing an equivalent to It’s aWonderful Life for the Baby Boomer generation and it’s a hard heart that can’t find a warm place for its humanist message. Fittingly, given the Capra reference, there is an inordinate amount of corn, but of a different stripe, and also plenty of heart and soul. The film manages to frame an everyman in existential crisis and to connect the dots with a poetic take on a ball game, demonstrating again the surprising poetry to be found in the everyday as humans strive to find a sublime or transcendant experience, a bulwark against our impending mortality. Sentiment, (say it like it’s a good thing) when it’s done this well is appropriate and powerful. Field of Dreams, much misunderstood, highly recommended. 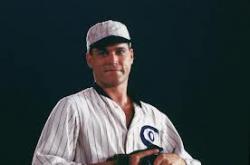 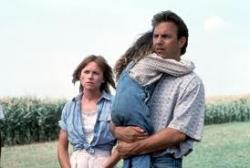 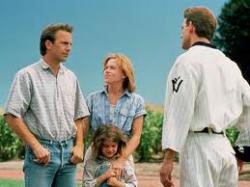