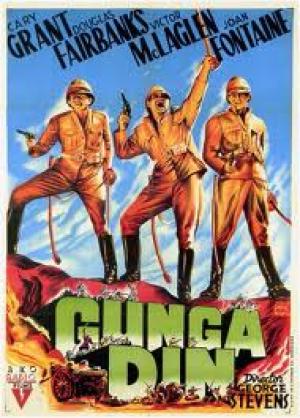 You gotta have friends...

British India and the Raj proved a popular destination with Hollywood screenwriters and producers in the 1930's, especially on the back of the hit 'The Lives of a Bengal Lancer' in 1935 and after the death of Rudyard Kipling in 1936. RKO acquired the rights to Kipling's epic poem 'Gunga Din' from his widow, and set about finding the right team to bring it to the screen, going through as many as 10 writers. many remained un-credited.   RKO were keen to keep Cary Grant on screen to capitalise on his growing popularity, and enlisted Howard Hawks to continue working with the star during the filming of their 'Bringing Up Baby' on the Kipling property. Hawks brought in his favourite writers Hecht and MacArthur to re-work an earlier William Faulkner script, and they wrote in a 'Front Page' variation where one the characters is being prevented from leaving a 'marriage' by a scheme of the other's. After 'Bringing Up Baby' went way over budget RKO sacked Hawks and brought in George Stevens to direct, and Stevens had his writers re-do the script, adding the Thuggee cult plotline and Douglas Fairbanks Jnr and Victor McLagen were cast to complete the three central compadres.  Originally Grant and Fairbanks were cast in each others roles, but Grant fancied doing Cutter as a cockney and talked Fairbank's into swapping.

Steven's opens by showing the three friends, all Sergeants in the British Army, brawling, drinking and womanising in the town, each an essential component of the tight and bonded male group. The sum of the whole is greater than the sum of the parts. They are given an assignment in a remote town to investigate an incident where a group of Kali worshippers have knocked out a telegraph connection and terrorised the region. The lads soon encounter the murder cult for themselves and in a scene that was repeated famously in 'Butch Cassidy and The Sundance Kid' years later, they escape certain death by jumping into a river. No surprise that 'Gunga Din' was William Goldman's favourite film. It transpires that Sgt Ballantine (Fairbanks) has a sweetheart and is leaving the Corp, Cutter (Grant) and MacChesnie (McLagen) conspire to keep him from doing so. Cutter gets caught up in a scheme to get rich, but ends up captured by the Kali cult and it's Ballantine and Mac to the rescue.

The theme of friendship and grace under pressure was perfectly embodied in the connections between the stars involved. Grant sparkled as the cocky cockney, witty and charming with a streak of mischief not far away. Fairbanks had the straight man part, and he's stuck with the romance as well, engaged to be married to Joan Fontaine, a fate worse than death you'd think according to his friends. McLagen is suitably solid as the anchor of the three, and the rest of the supporting cast is more or less irrelevant, with the exception of Sam Jaffe's title character, the water bearer Din. Kipling's sentimental verse is still touching, and even if Jaffe is miscast, it still works. The original choice was 'Elephant Boy' star Sabu, but he was busy in the UK doing the remarkable Alexander Korda film, 'The Thief of Baghdad'. The Sergeants three live a kind of permanent adolescence and the prospect of losing one to a marriage and civilian life would intrude on their reverie, and they take steps to prevent it, so in many ways this fable is a variant on Peter Pan, it's about not growing up and about re-living an irresponsible life over and over. No wonder this kind of escapist fare rang a bell with audiences all over the world on the eve of war in Europe. The old fashioned colonialist prism holds, stiff upper lips all 'round and Hollywood dreams up an Empire upon which the sun never sets, no contemporary political subtext is discernable, to the relief of many I'm sure.

'Gunga Din' was produced in 1939 at the zenith of the Hollywood studio system, it's 'Annus Mirabilis', the same year that produced 'Gone With The Wind', 'The Wizard of Oz', 'Stagecoach', 'His Girl Friday' et al, and 'Gunga Din' can stand up proudly in that company. The charm of the performances, especially Cary Grant is the ultimate example of a 'movie star' property providing matchless entertainment. One wonders what Hawks would have brought to the direction? Ironically, as it happened, Stevens proved every bit as meticulous and the budget was overrun by nearly double, fortunately it was a huge and enduring hit with the public and  made good money every time it was re-issued. George Stevens proved to be a reliable and competent director who hit big with some major successes after the war, in which he served in the military with great distinction. He formed an independent production company called Liberty Films with Frank Capra and William Wyler, to take advantage of the changing power structures in light of anti-trust legislation which was diminishing the big studio's monopolies. Liberty folded without really getting off the ground, responsible for only two Capra films. 'It's a Wonderful Life' amongst them, and Paramount absorbed some of the projects that were on it's slate, 'I Remember Mama' amongst them, and shortly after the acquisition yielded 'Shane' from Stevens and 'The Heiress' and  'Roman Holiday' from Wyler. Not a bad return. 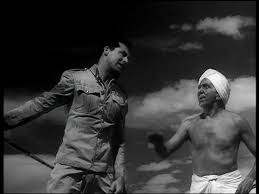