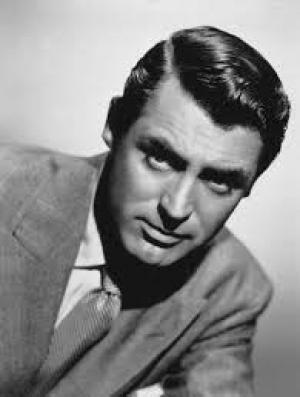 “I pretended to be somebody I wanted to be until finally I became that person. Or he became me.”
~ Cary Grant

If anyone epitomises movie star elegant and classic cinematic cool, it’s Archibald Leach from Bristol in the UK, better known to the world as Cary Grant. Like Stan Laurel and Charlie Chaplin before him he travelled to America as part of a vaudeville troupe, and stayed to tread the boards as a comedian, acrobat and juggler for a decade before feature film work beckoned. He was 28 when he signed the standard 7 year deal with Paramount in 1932, and they immediately put his good looks to use as a support actor in routine programmers. He quickly moved up the ladder to a key second string role in Devil and the Deep  with Gary Cooper, Paramount’s biggest star, and then with Marlene Dietrich in the Josef Von Sternberg oddity Blonde Venus.

Grant star was polished further by Mae West who used his sex appeal to balance hers in the risqué pair of She Done Him Wrong  and I’m No Angel,  before he languished for a couple of years (and learnt his craft) in a string of unremarkable properties. All that changed in 1937 when all of the years as a comic on stage, his good looks and his natural athletic grace was captured, first by Norman Z. McLeod in Topper,  and  by Leo McCarey in The Awful Truth.  Paramount realised they had a first rate comic actor with the lightest touch in the business and Cary Grant became a movie star of the first rank.

The most important professional relationship in Grant’s life commenced with the next film he made, as Howard Hawks cast him in the seminal screwball comedy, Bringing up Baby,  co-starring Katherine Hepburn. Despite the fact it flopped and that Hawks was removed from Grant’s next film, Gunga Din,  and replaced by George Stevens, the pair began a lifelong mutual admiration society. If that film had demonstrated Grant could also play a masculine, action type, then his next proved that drama was also within his range, the magnificent Hawks production, Only Angels Have Wings.   The pair followed it almost immediately with the immortal His Girl Friday,  one of the greatest comedies of all time, and Grant then re-teamed with his friend Kate Hepburn to resurrect her stalled film career in the superb The Philadelphia Story.

Cary made another pivotal career move by working for fellow Brit Alfred Hitchcock in 1941, soon after Hitch arrived in the US. He made the entertaining and successful Suspicion,  and followed up with one of the most stylish of all 1940’s films, Notorious,  co-starring with the luminous Ingrid Bergman. He worked in a variety of fine films during that decade, with Talk of the Town,  with george Stevens again, Destination Tokyo  and Hawks’ I Was a Male War Bride  as stand-outs.

Cary Grant had proved that the male screen star of the mid 20th century could be a multi-faceted man. Grant incorporated a distinctly feminine element in his persona, one that presented sensitivity as being a key part of the fully rounded man. Grant’s heroes were stylish, thoughtful, charming, suave, clever and confident, but never descended to bluster of macho posturing. In many ways he set the scene for the ‘new man’ as represented by Montgomery Clift and Marlon Brando to break through in the years after WWII.

Grant crowned his singular achievements with more winners by Hawks (Monkey Business),  Leo McCarey (An Affair to Remember),  Hitchcock (To Catch a Thief)  and Stanley Donen (Indiscreet, Charade),  all benefiting from Cary’s light touch and brilliant timing, in comedy, romance or drama. Hitchcock saved his best role for Grant until the last of their four films together, the masterpiece North by Northwest,  one of the towering achievements of the studio system and all time great thrillers, where Grant’s seamless and effortless genius elevates the spy yarn to the realm of the immortals.

Cary Grant only made another 5 films in the years following, retiring to raise a young daughter as a mature aged father, his screen legacy as one of the all time great movie stars locked in for eternity. What is often overlooked is the skill and craft that underpinned his work, his impossibly handsome, movie star visage getting in the way of any balanced critique. Cary Grant looked like the ultimate, glamorous film star, in ways ordinary mugs like Spencer Tracey or Humphrey Bogart did not, and the Academy Awards finally balanced the ledger with an Honorary Oscar in 1970, presented by Frank Sinatra. The inscription says it all, "for his unique mastery of the art of screen acting with the respect and affection of his colleagues."

In many ways Grant was the antithesis of the ‘method’, the internalised approach to acting that came with the post war influx of Actor’s Studio alumni to Hollywood. Archie Leach understood that Hollywood was a dream factory, and set his mind to creating a ‘dream man’, not one based on the pain of his very deprived and turbulent childhood. That he did it so well is a small miracle of sorts, regardless of the methodology he employed, in fact he once gave a hint as to the impossible ephemera he’d created when he said, “Everybody wants to be Cary Grant, even I want to be Cary Grant.”  The enduring beauty for us is one where the glorious chimera of Cary Grant will illuminate cinema for as long as we care to fall under its silver spell.