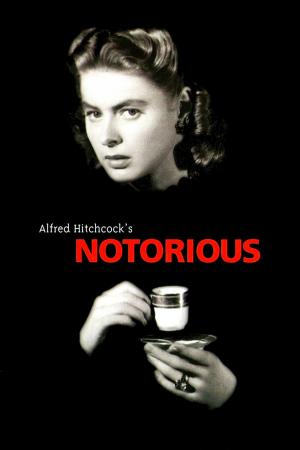 Tainted love in the key of Hitch

Hitchcock must have loved making Notorious. He managed to slip a fairly scandalous scenario, for the time, past the censors of the Breen office under the guise of a propaganda film encouraging patriotism. The morals of a party girl are fine when employed in the name of state security it seems, even if her controllers are pimping her to a Nazi! The party girl in question is the exquisitly beautiful Ingrid Bergman, one of Hitch’s favourite heroines. The unlikely love story begins with Devlin (Cary Grant) trying to lure the daughter of a notorious Nazi, just convicted to 20 years for treason, to work against her fathers old cronies now active in Brazil. Bergman plays the daughter, Alicia, trying to deaden the public notoriety with booze and parties and men. Devlin makes his pitch, knowing that if nothing else, Alicia loves America and  this would be her chance at redemption. The deal is made and Dev escorts her to Brazil where they both learn of her assignment. Grant, working with Hitch a second time after his turn in Suspicion, plays the agent with a tone of bruised detachment, a subtle and nuanced performance. He is cool and professional but is unable to resist the allure of Alicia and soon the two are in love.

Their reverie is abruptly interrupted by the nature of the work. Alicia is required to seduce one of the Nazi clique, co-incidentaly an old acquaintance, Alex Sebastian played with style by Claude Rains. Alex is smitten again by Alicia, but in order to prove she’s not interested in Devlin, she’s asked to marry him. She asks advice from her handlers, hoping Dev will speak out against the arrangement but he’s unsure as to whether the party girl has changed her spots and if she really loved him at all. He stays silent and she takes it as a betrayal, and therefore agrees to marry Alex, against the wishes of his domineering mother, superbly played by Madame Konstantin. Hitch and co-writer Ben Hecht added an ‘atom bomb’ sub-plot, as the fear that other countries would be nuclear capable post WW2 was a key driver to the forthcoming cold war. Hitch was responsible for assembling documentary footage of the Nazi death camps for the British government, but it was deemed to be too demoralising to be released to the general public, but the experienece profoundly affected him and any anti Fascist stance was to be encouraged. The substance in the wine bottles found by Devlin is meant to be uranium.

The ‘elephant in the room’ is the fact that Alicia will be sleeping with the enemy. In an era when sex between the hero and heroine was barely mentioned, this is a very bold undertaking. Alicia’s morals are derided by her scheming controllers, and her agreement is not viewed as the sacrifice we know it to be. the value of a woman for them is her ability to turn a man’s head, this time in a ‘noble’ cause. Alicia is out to redeem her family debt to her country, even at the expense of her true love and reputation. Hitch uses the odd trademark visual devise, the most obvious the remarkable high to low shot ending on the key in Alicia’s hand at the large party. Rains plays his villian with a degree of sympathy and charm, maybe making the audience subliminally less judgemental of Alicia’s actions. The tension builds as Alicia uncovers the nature of the Nazi plot. Devlin is about to leave her to her job, but mysteriously she fails repeatedly to front up to their clandestine meetings. Concerned he visits the Sebastion mansion and finds her there ill and bedridden, being slowly poisoned by her husband and mother-in-law. The stand-off as he carries her out, is truly memorable and tense.

Visually unfussy, but crisp and lean in glorious black and white, the whole film turns on the sexual dynamic between Bergman and Grant. It is easily one of the best pairings in a Hitchcock as their scenes together have a spark and conviction that takes them out of the sterile screen lovers stereotypes that were so common in the 1940’s. Hitchcock also had a tendancy to employ rather clunky pop psychology in some of his scripts at the time, but in this one the motivations and the character outlines are well delineated and devoid of faux Freud. The ending also works superbly as a modern fairy tale… Princess in castle with wicked relatives is rescued by dashing Prince after eating the poison apple anyone? The fact that the Princess had a less than ‘pure as driven snow’ history must have tickled Hitch no end.  One of his very best. 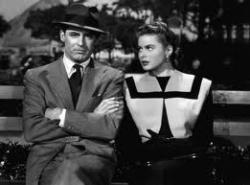 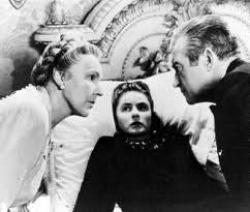 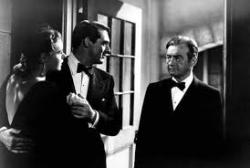 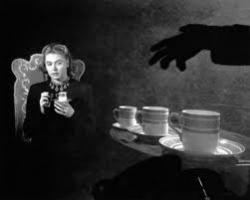 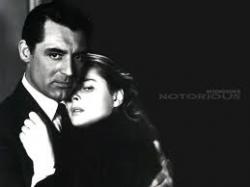