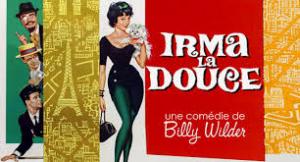 "Eighty percent of a picture is writing, the other twenty percent is the execution, such as having the camera on the right spot and being able to afford to have good actors in all parts." ~ Billy Wilder

Billy Wilder and I. A. L. Diamond adapted a 1956 stage play, a French sex-farce for their 1963 re-teaming of Jack Lemmon and Shirley MacLaine. The film is a warm-hearted fable, a fractured fairy tale that pokes fun at American puritanical attitudes to sex, done with great charm and deliberate theatricality. Wilder initially wanted to cast the project with Marilyn Monroe as the titular character, despite his many issues with her behavior in their previous hits, but her frequent illnesses and subsequent early death prevented a reunion with her Some Like It Hot collaborators. A key decision was to employ the brilliant French Set Designer Alexandre Trauner to dress the sets, a veteran of René Clair and Marcel Carné productions in the 1930’s and ‘40s, and Trauner’s work created a delicious conceit, a Paris street scene straight out of a dream.

Nestor Partou (Jack Lemmon) is an idealistic policeman who is assigned to a red-light district of Paris, and on his first day he runs in all of the street walkers he encounters, unfortunately encountering his boss (Herschel Bernadi) in the process. He is fired and befriended by one of the women he arrested, Irma (Shirley Maclaine) a sweet natured prostitute who takes him in much like the puppy she permanently carries around. Nestor soon finds himself in dispute with Irma’s Mec (pimp) and inadvertently bests him in a fight, effectively taking his place as Irma’s protection and beneficiary of her work. All is fine until Nestor’s jealousies about Irma’s multiple sexual partners overwhelm him and he conspires with bar owner Moustache (Lou Jacobi) to find a solution.

America in 1963 was finally breaking free of the shackles of the Production Code, which had forced a straightjacket around what could or could not be presented to cinema audiences. Some bellwether foreign films would eventually challenge the notion of what was obscene, (notably Louis Malle’s 1958 film Les Amants), and Wilder’s entry was part of a pattern of producers pushing what was heretofore unacceptable. After a benign ‘postcard’ travelogue opening (with a narration by uber-Frenchman Louis Jordan) Wilder shows a series of startling-for-the-time encounters between Irma and her ‘Johns’, revealing them plainly exchanging money for sex, an unheard-of breach of the code that had been followed slavishly for the last 30 years. Wilder also has fun with a rare polemic, where the naïve Nestor has his petty bourgeois views ridiculed directly by Moustache, in a memorable and sharp-edged soliloquy. Moustache essentially explains the difference between a liberal, European centric take on sexual mores and the straight-laced, Puritan perspective Nestor subscribes to.

The film is also non-condemnatory of the life of the prostitute, where her line of work is seen as just that, as essential to the community as the sides of meat and cabbages at the market around which the film is set. The women are treated with empathy and it’s the police who are corrupt (another breach of the code) in this telling, both benefiting from and indulging in sampling the bill of fare on sale. Wilder is at his happiest when he’s pricking hypocrisies of any stripe, and to wrap it up in a farce that ends in a prostitute giving birth in a church on her wedding day is the cherry on the top.

Wilder found his best actor/collaborator in Jack Lemmon, saying simply, “Happiness is making a film with Jack Lemmon”, and every time they worked together something magical happened. Shirley MacLaine proved an ideal foil again as the pragmatic working girl and earned an Oscar nomination for her efforts. She had expected to win, Oscar-wise, for Wilder’s The Apartment, but Liz Taylor had a tracheotomy and that was that. Moustache was a role originally intended for Charles Laughton, a great friend of Wilder’s, but he was ill and died soon before production began, and Lou Jacobi stepped up and steals every scene he’s in.

Wilder has fun in juxtaposing a meat market with the Hotel Casanova, as Nestor works in his meat market to keep Irma from working in hers. There’s a neat sight gag with Lolita, wearing the notorious glasses from Kubrick’s film of the year before and Nestor’s Lord X seems to only know anything of England that can be learned from film titles. The theatricality and deliberate artifice in the production serves to create a fantasy world that allows the broad farce to succeed, letting the piece take on a fairy tale hue; reality this is not. It’s because of this dimension that Wilder can aim his barbs, pricking the faux morality of pre-counterculture America, and lampooning its consumer/free market ethos. If sex is a product (and it is) then Wilder is happy to let the market decide, as sex is not love and vice versa.

Billy Wilder loved America, but his European sensibility sometimes rubbed his adopted homeland the wrong way. America may have been appalled at Ace In The Hole, and they turned on him again with his next bitter pill, Kiss Me Stupid, but they liked Irma La Douce enough, titillated by the salacious even as they tut-tutted at the subject matter while handing over their box-office dollar. Billy loved the contradictions and never stopped pointing them out with candour, humour and a steely, satirical wit. Irma la Douce is a sweet, dirty fable, a slightly delirious fever-dream of a film, not the best Wilder/Lemmon in the pack, but that’s another story. 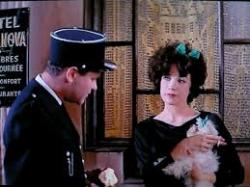 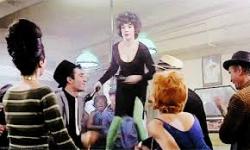 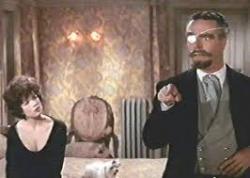