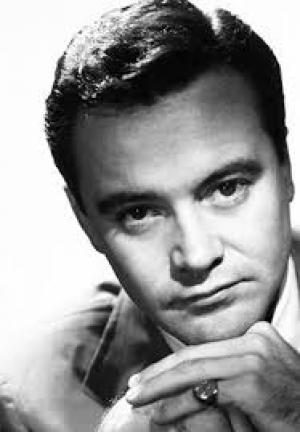 "I won't quit until I get run over by a truck, a producer or a critic."
~ Jack Lemmon

Jack Lemmon was the Boston born, Harvard educated son of a successful businessman who opted for a life in show business, deciding at the age of 8 that he wanted to be a performer. After a stint in the navy in WWII, as an Ensign, an experience that would come in handy a decade later, the naturally affable young man soon found a calling in acting and studied under renowned teacher Uta Hagen before finding consistent work on Broadway. Lemmon was soon bound for Hollywood, where he signed a long-term contact with Columbia and in only his second film he was billed as the leading man against Judy Holliday in It Should Happen To You, directed by veteran George Cukor. Journeyman director Mark Robson teamed Lemmon up with Judy Holliday again in the fine comedy Phffft, which, like many of Lemmon’s early roles were based on successful Broadway plays.

Lemmon’s innate comic abilities and exquisite timing led to him becoming one of the great comic actors to have graced American screens, and no less a figure than John Ford soon cast him as Ensign Pulver in his troubled adaptation of the Broadway hit Mr Roberts, and Lemmon won the Best Supporting Actor Oscar in only his 4th film. Lemmon knocked along in a series of adequate 1950’s comedies (My Sister Eileen, Operation Mad Ball, Bell Book and Candle), all directed by competent Columbia journeyman Richard Quine, or You Can’t Run Away From It, by Dick Powell (again opposite Judy Holliday), even branching out into more dramatic roles with Robert Parrish’s Fire Down Below, opposite Robert Mitchum and Rita Hayworth, before he struck collaborative pay dirt in the form of the abrasive, acerbic Austrian genius, Billy Wilder.

Billy Wilder had been skewering America’s sacred cows for nearly two decades by the time he teamed up with Lemmon, but the working partnership proved to be a fruitful one as it lasted nearly 25 years and produced 7 films and lifelong friendship. Their first film together was the immortal Some Like It Hot, with Tony Curtis more than holding his own against Lemmon’s bravura turn and Marilyn Monroe stealing every scene she’s in.

“Happiness is making a film with Jack Lemmon” ~ Billy Wilder

After the actor finished It Happened to Jane for Richard Quine, a comedy with Doris Day and Ernie Kovacs (one of Lemmon’s best friends), the pair teamed up again for one of the greatest satirical comedies of all time, The Apartment. The film won a Best Picture Oscar and turns upon the seedy underneath of American corporate life as skewered by the brilliant Wilder/Diamond screenplay and the beautiful interplay by Lemmon and Shirley MacLaine, one of the high points of Lemmon’s career. The Notorious Landlady  followed, the 4th of 5th collaborations between Lemmon and Richard Quine, before the all stops drama that gave the actor full range of expression, Blake Edwards’ Days of Wine and Roses, resulting in an Oscar nomination. Lemmon has since said that he had a drinking problem when portraying an alcoholic and later did Alcoholics Anonymous for himself.

Wilder wanted to re-team Lemmon and Marilyn Monroe for the French farce Irma La Douce, but Monroe’s death forced him to offer it to Shirley Maclaine, who was fine in the part and a match for Lemmon’s double role. The film is sadly under-rated in the Wilder canon and a beautiful example of Lemmon’s ability in broad comedy. In 1965 Blake Edwards offered him a scene chewing double role in the huge hit The Great Race, opposite Tony Curtis and Natalie Wood before Wilder knocked again with another mordant morality fable, The Fortune Cookie. This film was the first of 10 films Lemmon would make with Walter Matthau, and the pair teamed with Wilder another 3 times, notably for his adaptation of the hit play The Odd Couple 2 years later.

Lemmon formed JML, a production company, in the late 1960’s and made Cool Hand Luke amongst others, and teamed up with that films director, Stuart Rosenberg for The April Fools, an under-appreciated bauble with Catherine Deneuve. Lemmon directed for the only time with Kotch, helping his good friend Walter Matthau to realise one of his career best performances. The next couple of years harvested a Golden Globe for Avanti!, another Billy Wilder gem, and an Academy Award for another dramatic role as an alcoholic in Save The Tiger. Wilder teamed Matthau and Lemmon up for a solid remake of The Front Page before Jack fronted an all-star disaster film, so popular in the 70’s, Airport ‘77.

As Lemmon moved into elder statesman roles he struck gold in The China Syndrome, opposite Jane Fonda, in a Canadian production, Tribute and in the razor-sharp Costa-Gavras drama, Missing. After a decade of relative inactivity, he returned with a bang in a career best role in Glengarry Glen Ross and reminded everyone what a fine actor he could be in any genre, stealing the show from Kevin Spacey, Alec Baldwin and Al Pacino, no small theft! In the final decade of his career he managed a couple of beautiful characterisations for Robert Altman in his masterpiece Short Cuts, and in the comedy Grumpy Old Men with Matthau co-starring, before the pair embarked upon an ill-advised sequel to The Odd Couple, a cardboard swan song to a glorious career.

Jack Lemmon hated being thought of as a comedian, and he was easily categorized as such because he was so good at it and that’s where his early success came from, but he was the fully rounded thespian. As if to underscore this he played in Kenneth Branagh’s Hamlet in the late ‘90s, before he died in 2001 having his headstone read – JACK LEMMON in. Jack Lemmon’s commitment to his craft, his innate decency and unerring knack of finding the truth in his roles made him an American legend, one of the immortals, acting wise.