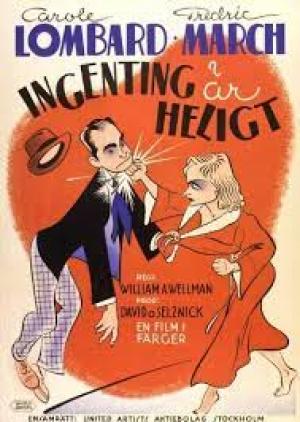 'Get a director and a writer and leave them alone. That's how the best pictures get made.' ~ William A. Wellman

David O. Selznick was a significant producer in Hollywood before he attained film immortality by producing Gone With The Wind in 1939, case in point this brilliant Screwball Comedy from 2 years earlier, Nothing Sacred. Ben Hecht was given a short story to turn into a feature and did it during a two-week train journey but, given this was the man who wrote the seminal Screwball Comedy Twentieth Century, that seems appropriate enough. Maverick director William A. Wellman, who’d already burned through contracts with Fox, Paramount and Warner Brothers, was given the director’s chair and proceeded to assemble a team that could produce a classic of the genre.

Wally Cook (Fredric March) is an ace reporter for The Morning Star, a high rating New York newspaper, but after a scoop involving a fake Middle Eastern potentate, he is on the outer with his boss Oliver Stone (Walter Connelly). He investigates a small-town tragedy involving the looming death of Hazel Flagg (Carole Lombard), a young woman from Radium poisoning and brings her to see the sights of the big city before she dies, in exchange for her exclusive story. Hazel finds out her diagnosis was a mistake and that there is nothing wrong with her but goes through with the offer. Hazel is dazzled as New York throws itself at her feet, as does Wally and soon she is regretting the trip and the deception.

Wellman was a no nonsense, straight shooting, man’s man, but paradoxically some of his best films involve strong or clever women and star some of the great actresses of the period, like Barbara Stanwyck, Janet Gaynor and Carole Lombard. Ben Hecht had provided Lombard with one of her signature roles in Twentieth Century, opposite John Barrymore, and Hecht pushed for Barrymore to repeat the dose as Wally, but his worsening alcoholism had burned more Hollywood bridges and Selznick refused to take a chance on him in the role. Fredric March proved more than capable in the lead role, as he had for Wellman’s other triumph of the same year, A Star is Born. In a small connecting thread, the small role of the MC in Nothing Sacred is played by Frank Faylen, the real-life alcoholic husband of Barbara Stanwyck and the model Wellman used for the character of Norman Maine in A Star is Born.

Hazel arrives in America in 1937 scarred by years of economic depression, where the gap between the haves and the have nots is as wide as it will ever be in the 20th century. Screwball as a genre often parodied and inadvertently entrenched the fascination with the rich, exacerbated by the inequality evident in the lived reality of ordinary people, who ironically paid for a movie ticket to gaze upon a Hollywood approximation of extreme wealth - a kind of wealth porn escapism. The luxuries heaped upon her by a rabid media, eager to exploit anything and everything for a ratings hit, prove hard to reject when she realises the moral dilemma of taking them under false pretenses. The reporter Wally also has a moral awakening, embracing the redemptive power of falling in love with Hazel and proposing marriage to who he thinks is a dying woman.

The satire is sweet natured mostly, lampooning the cult of celebrity in an era where ticker tape parades were reserved for heroic fliers, explorers or adventurers, not terminally ill blondes. The set-up is of secondary import as the strength of the piece lies squarely with Carole Lombard’s wonderful, guileless central performance as Hazel Flagg. The role was difficult and multi-dimensional before that word was ever applied to Hollywood characters, in so much as black comedy was not yet a thing and a ‘comedy’ role incorporating such a dark undercurrent was unheard of. Lombard makes it her own in a way that is hard to imagine any contemporary doing – Stanwyck too dynamic, Hepburn too patrician, Arthur too earnest, Russell too earthy and Janet Gaynor (who Wellman was originally going to use after A Star Is Born) too prissy. Lombard’s characterisation is startlingly modern and controlled and she brings the right amount of humanity, pathos and tenderness to make it entirely credible.

Wellman was also well served by the rest of the marvelous cast, headed by Fredric March as Wally in a largely thankless role as Lombard’s straight man. March (unlike the vivacious Lombard) was something of a humourless stick in real life, but Wellman teased out an energetic, likeable everyman to stack against his dramatic triumph of Norman Maine for the director in their stellar year. Notable supports were Charles Winniger as the sweet doctor out of his depth, the always watchable Walter Connelly as the newspaper editor Oliver Stone (you read that right), Hattie McDaniel and Margaret Hamilton who would have memorable roles in Selznick’s Gone With The Wind and MGM’s The Wizard of Oz respectively just two years later.

The film was also notable for its use of colour, especially in the back projection scenes, which made it a very expensive film for its time and caused it to lose money for the unhappy, memo happy producer. Wellman would command top budgets for a few more years and like his good friend Howard Hawks he would apply his skills to many different genres as his capacity to be easily bored outweighed his ability to play the Hollywood game on their terms. Nothing Sacred is a glorious gem in the glowing constellation of 1930s Hollywood cinema and stands both as one of the remarkable documents of the era and as a testament to the enduring appeal of Carole Lombard, for whom the sequence of words ‘one of a kind’ must surely have been coined.

*Dedicated to my Twitter pal Hazel Flagg and his late husband. 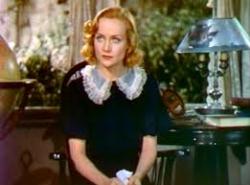 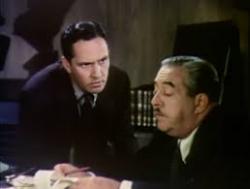 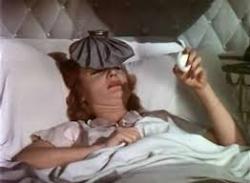 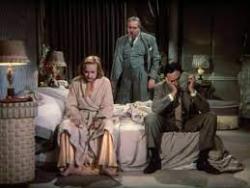 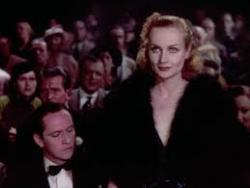