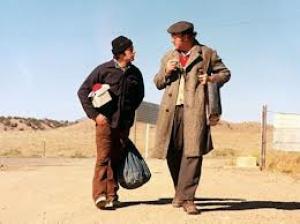 'Scarecrow' is a film that could only have emerged under the conditions of the American Renaissance of the late ‘60’s and early ‘70’s, and is a fine and under-rated example of the genre. The result of a generation of film students hitting the workforce, amped up by the success and innovations of the Nouvelle Vague, emboldened American directors to seek a new way of making films in both form and content. It’s certainly impossible to imagine two of the biggest male stars of the ‘40’s or 50’s, like Spencer Tracy and Clark Gable playing such unlike-able and unheroic types as Max and the Lion, or being involved in a low-key movie with such an ambiguous ending, but the game had changed and American cinema was the better for it. Jerry Shatzberg had directed Pacino is the uneven but intense 'Panic In Needle Park' 2 years prior, and with 'Scarecrow' found himself with two of the hottest and most lauded actors on the planet in Gene Hackman and Al Pacino. Legendary cinematographer Vilmos Zsigmond (McCabe and Mrs Miller) shot the film, with a script by Garry Michael White.

Max (Gene Hackman) and The Lion (Al Pacino) meet by chance on a dusty Californian road, two drifters who eye each other off warily as they compete for a ride from passing motorists. The two eventually strike up a friendship and Lion agrees to join Max in his scheme of setting up a car wash business in Pittsburgh. The two bum around the mid-west, like throwbacks to the boxcar riders of the Great Depression, until Max takes Lion to meet his sister in Denver. The two men spend time with the sister and her best friend, who falls for Max, but Max and Lion get raging drunk and after a brawl are arrested and thrown in the county goal for 1 month. Upon release, they set out for Pittsburgh, but make a side trip to find Lion’s wife and child, who he’d abandoned years before.

America in 1973 was mired in a battle for hearts and minds, the counter culture promise of the '60's faltering in the face of a re-elected Nixon administration, and a deeply unpopular war in Vietnam. The film instinctively evokes the depression era, when traditional values were called into account as people struggled to find meaning in a changing world. Max and Lion are adrift both physically and emotionally, as they both attempt to cover up their insecurities and fears in different ways. Max is all piss and vinegar, blustering his way through life, insisting he has a meticulous plan, distrustful of everyone and everything. Lion, by contrast, uses humour to put a wall between himself and the rest of humanity, and so is deceptively more amenable. The arc of the film is in the two finding common ground in the gap between their differing philosophies.

The strength of the film is in the realism and authenticity it achieves via the unfussy and non-intrusive direction and the superb characterisations of the lead actors. Pacino was in a rare vein of form, having filmed Francis Ford Coppola's masterful 'The Godfather' prior, and would go on to it's sequel and to the title role in Sydney Lumet's wonderful 'Serpico' the following year. Gene Hackman, coming from a New York theatre background, had hit his straps also in the movies, having risen to genuine stardom with 'The French Connection', and commercial popularity with 'The Poseidon Adventure'. Hackman continued to prove himself a versatile character actor, and hit a career best mark the following year with Coppola's 'The Conversation'.

The tenor of the French poetic realist films, crossed with the docu-drama feel of the Italian neo-realists infuses the aching honesty of tone that the best American films of the Renaissance period have, and 'Scarecrow' is a fine and under valued example. 'Scarecrow' was much feted at Cannes in 1973, so much so it won the Grand Prix, but seems to have been largely forgotten in the wake of the critical noise around some of the more well known American films of the period.  It remains a wonderful example of the best of the era, underpinned by the excellent work of two actors at the top of their game, Hackman delivering a brilliant and nuanced performance as Max, balanced by a delicate and under-stated turn from Pacino. Well worth a first or a repeated visit. 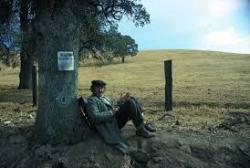