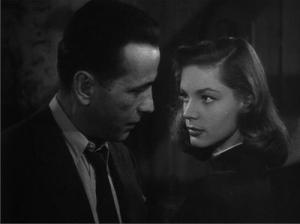 Bogart and Baby are back

Howard Hawks wanted to make a comedy, the Broadway hit Dark Eyes, after To Have and Have Not  but couldn’t get the casting right, and resisted pairing Bogie and Bacall, then in the start up phase of their love affair, so soon after that film. Warner Bothers on the other hand were previewing the film to great results, and sure they had a winning combination put pressure of Hawks to find a vehicle for the couple to star in. Hawks relented and used a Raymond Chandler novel as his source material and, as was his custom, hired top flight pro’s to adapt it, his good friend William Faulkner, regular collaborator Jules Furthman and Leigh Brackett, who he mistakenly thought was a man after reading a hard boiled crime novel she wrote. The plot is famously labyrinthine, and to dwell on it and it’s apparent holes would be to miss the point of this engrossing film, as it’s not the ‘whodunnit’? that’s important, it’s the way the pieces play against each other that keeps our interest.

Bogart plays Private Detective Philip Marlowe, he arrives at a palatial house to meet an elderly Colonel who has a daughter called Carmen (Martha Vickers) and she’s being blackmailed. Marlowe takes the case, and upon exiting he’s confronted by the Colonel’s other daughter Vivian (Lauren Bacall) who complicates matters further by entwining the blackmail scenario with another problem involving an ex-associate called Sean Regan. Marlowe is soon up to his neck in strange going’s on in bookstores, illicit photos of Carmen and a murder that a drugged Carmen has been present at. Marlowe takes Carmen home but upon his returning to the crime scene the corpse is gone. The police are soon suspicious of Marlowe and before long he is the meat in several sandwiches and not sure how all the ends are connected. In true gumshoe tradition Marlowe falls for one of the daughters, Vivian, and is also beaten and warned off the case. Marlowe links everything to a small time gangster named Eddie Mars, but that leads to implications for Vivian and issues of trust and motivation for the nascent lovers. Marlowe succeeds in pulling all the strands together, surviving a shootout in the murder house where he found Carmen, and in such a way that he can construct a future that can include Vivian after all.

The confusion that surrounds this film was primarily caused by the fact that Warner’s were concerned that Bacall didn’t have the impact in this film that she had in her debut, and given the critical failure of her last film Confidential Report, they were doubly worried her star would diminish before it really took hold. Scenes were cut with characters that had crucial narrative detail, and scenes were added that gave Bacall more screen time and more sass, to mirror the relationship she had with Bogie in To Have and Have Not. This improved the sexual frisson between Bogie and Baby, but didn’t help the clarity of the plot, or Marta Vickers career as most of her pivotal scenes were cut, thought what remains she is sensational in. The delay in release caused by the concerns and the re-shooting meant that the film was over a year and a half in the can before it saw the light of day. Some re-shoots were done a year apart from the originals, and once Bogart agreed as to the desirability of giving more emphasis to Bacall, he insisted that he’d only re-shoot if Hawks directed.

The end result however is pure and simple, a Noir masterpiece. The studio bound sets give an quasi-hallucinatory effect in some ways, perfectly suiting the unease that accompanies Marlowe as he attempts to follow the clues. Marlowe is the ultimate existential man, cynical yet honourable, a moral rock in a shifting immoral universe, and he’ll do all he can to stick to his own inner code, even if it means losing something or someone who’s important to him. With a post-war malaise about to engulf America, and especially to challenge Hollywood in the form of the HUAC witch-hunts, the times called for a man with dignity and forbearance, and in Marlowe he stepped forward. Ironically Bogart himself could not match the fiction as evidenced by his backing out of John Houston and Phillip Dunne’s protest committee against HUAC, once the bad publicity hit Bogie he retreated from his widely stated liberal views, and regretted it (the backdown that is) to the end of his days. Hawks and Bogart fell out as well, as the personal crisis of his marriage falling apart and the pressure of the political situation saw the ultimate actor’s actor come in late to set for the first time ever, causing an already difficult production more delay and expense. Hawks never forgave Bogart, some say he was also jealous that Bacall fell in love with the actor, and they did not work together again.

Bogart, for all the on set issues, is splendid as Marlowe, the perfect fit of actor and role with Bogie at the peak of his powers. That he played so few detectives will come as a surprise to modern audiences as he seems to completely embody the classic hard bitten Shamus, but that’s tribute to the definitive way he engendered everything about the character, and to the consummate skill of an old Broadway pro. Bacall shines as the eye candy, and Warner’s would not need to fret on their investment as she remained a star for some time. Hawks never really returned to the dark streets and moral shades of noir, preferring in his later career to deal in the more black and white relativities of the Western mythic hero. Perhaps he thought that as he’d made yet another definitive-of-it’s type genre film with this quintessential noir he’d never be able to top it? 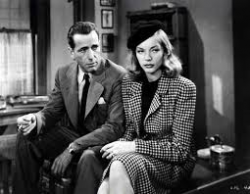 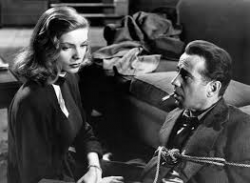 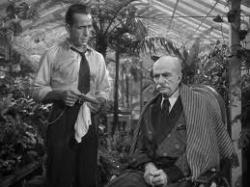 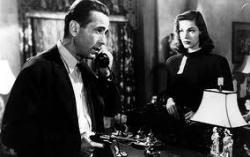