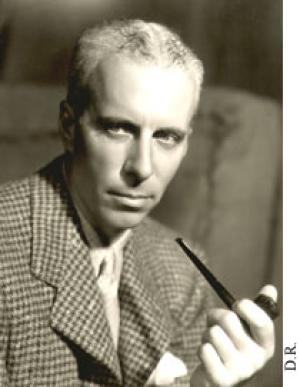 "I'm such a coward that unless I get a good writer, I don't want to make a picture."
~ Howard Hawks

Howard Hawks was the ultimate professional over nearly 50 years as a feature director. His mid-west no nonsense ways were applied to many different jobs in Hollywood during the early '20s, and he successfully helmed  projects from 1926 to 1970. Hawks was known for his use of great writer's, closely working with Ben Hecht, William Faulkner, Jules Furthman and associated with friends like Ernest Hemingway and Raymond Chandler. Hawks made classic films in several different genre's, never staying too long in any one, seemingly needing to challenge himself in new territory on a regular basis. His technical mastery and keen ear for dialogue helped him develop an 'overlapping' speech style, used to best effect in his fast paced 'screwball' comedies of the late '30's, but also heard in his other genre films, such as Film Noir and even Westerns.

The major themes found in Hawks' work are expressed mostly in his framing of groups of men under pressure, needing to prove their professionalism. 'He was good', 'Am I still good'? are stock phrases found in Hawks films, and the distaff side is found in strong women, able to appreciate the dimension of these taciturn men, but looking for completion and redemption in the same way. Hawks was overlooked by the Hollywood myth factory until the French film critics of the '50's proffered Hawks as the perfect example of an 'auteur' in the studio system, someone able to make 'personal' films in an otherwise conveyor belt type processing system. Hawks would no doubt have been amused by this 'intellectualising 'of his work, but he played along with them and was not averse to gilding many a story for self aggrandisement.

Hawks, like his great friend John Ford, was a paradox, he downplayed the intellectual and artistic nature of his work, yet placed absolute faith in the artistry of the best writers and in the poetic framing of the best cameramen, and was able to make and sustain crucial artistic choices throughout his long career. What remains is a body of work the envy of most others, a remarkable legacy for a genuine maverick.

Land of the Pharoahs