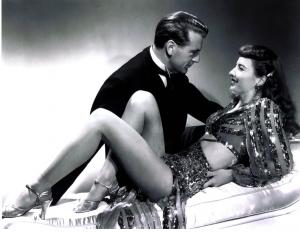 "I'm such a coward that unless I get a good writer, I don't want to make a picture."
~ Howard Hawks

Any film written by Billy Wilder and directed by Howard Hawks needs no other recommendation, but with such an odd pairing, Wilder the European intellectual and Hawks the all American action guy, the result was bound to be interesting at least. The contradictory mix proves a winner, with Wilder adding depth and bite to the screenplay and Hawks handling the conflict between the characters beautifully. Wilder wanted control over the realisation of his writing and Hawks’ allowed him to study his direction on set for Wilder to learn first hand the talents he would later employ when following in Preston Sturges’ footsteps in becoming a first rate writer-director, this suggests the relationship between the men was a good one. The film is one of the last in the cycle of ‘screwball’ comedies, by 1941 they seemed out of place in a World at war, even if the US was not yet engaged. It’s superbly shot by Gregg Toland and the score from Newman, Alfred is typically accomplished.

The set up is pure Wilder, smart and satirical, supposedly based on ‘Snow White and the Seven Dwarfs’, but with Wilder it’s Snow not-so-White. The film opens with a ‘fairy tale’ type title card, and opens out on the central group of ‘dwarves’, in this case academic specialists, strolling through Central Park for their morning exercise, They return to their house where they are working on writing an Encyclopedia, a commission involving several years work, they are currently in the middle of the letter ‘S’. This allows Wilder some nice lines from his cloistered academics about what they’ve written on ‘sex’, and sets up their essential naïveté in this area. Professor Potts (Gary Cooper) has an epiphany over ‘slang’ after an encounter with a garbage man proves his work to be outdated, he sets off into the field to expand his research, ending up in a nightclub watching Sugarpuss O’Shea (Barbara Stanwyck). The extraordinary Gene Krupa cameos here with the number ‘Drum Boogie’, a real highlight, with Stanwyck showing a great flair for burlesque, a throwback to her early years on Broadway in the Ziegfeld Follies. Potts gets caught up in the excitement, going backstage to ask Sugarpuss to contribute to his research group back at the house. Sugarpuss gives him short shrift, but after learning her gangster boyfriend Joe (Dana Andrews) has been arrested and that she’s going to be subpoenaed she needs a place to hide and arrives at the professor’s house, still in costume! Potts tires to send her home, but she feigns a bad throat from the rain, he checks and says it’s a little ‘rosy’, she replies in one of the great Wilder lines ’It’s as red as the daily worker and twice as sore’!

Sugarpuss is kept in the loop by Joe’s henchmen, and in a very odd proposal they bring around an expensive engagement ring, and as a wife can’t testify against her husband it’s a shrewd move. Potts keeps his research going and Sugarpuss chimes in, but mostly she livens up the dry, dusty intellectual group of men with her charms, much to the annoyance of the houskeeper, who Sugarpuss christens ‘Franco’. A conga line of dancing professors leads to the comment ’she’s the kind of woman that makes whole civilisations crumble’, and an ultimatum is given to Potts from Franco to evict her. In order to stay Sugarpuss feigns romantic interest in Potts, her ‘keen mind inseparable from her disturbing body’ as he puts it sees him reciprocate and he buys a cheap engagement ring and the other professor’s are beside themselves with boy-ish glee. In a great sexual aside after Sugarpuss kisses Potts, there’s a shot of Sugarpuss sharpening Potts’ pencil! Joe summons Sugarpuss to a rendevous in Jersy and the academics take her thinking they are going to Potts’ wedding. There’s a lovely scene with the proff’s singing an old-time song ‘Genevieve’ at Potts’ very tame de-facto stag night, with Richard Haydn doing some great work as the only married academic remembering his long dead wife. The gangster’s plot is revealed, Potts is heartbroken but after Sugarpuss wises up she ends up sending back to Potts the expensive ring, meaning she kept his. The professors all ride to her rescue after escaping the henchmen and Potts fights Joe and wins the hand of Sugarpuss.

Snow off-white and the seven nerds may be the modern reference, but actually what Wilder created was almost a satirical look at a monastery and eight cloistered monks. Sex is ever present in the European lexicon in a more overt way than the Anglo-American and Wilder slyly employs certain archetypes to great effect. Woman as corruptor and distraction from higher pursuits, in this case knowledge, is at the heart of the dilemma. Stanwyck’s legs make a great case for the fall of Adam, and at one point one of the professor’s is explaining womanly allure by the unfolding of petals on a flower! ‘No women on board’ was an old sailing adage, and here Sugarpuss is one of the Sirens of Titan luring the poor academics to their fate. What Wilder is saying is ‘relax, it’s a pretty sweet fate’. He leavens the fable with fair exchange, the professor’s get life and sex from her, she gets integrity and honour from them. Hawks had done the stiched-up academic professor before, virtually defining it with Cary Grant’s turn in Bringing Up Baby, and Cooper is amiable enough in the role here, but the real charmers are the ‘dwarves’. A brilliant ensemble of oddball character actors, each working beautifully with the others, but the star turn is Stanwyck’s, deservedly winning an Oscar nomination in what was a stellar year for her, with Meet John Doe (also with Coop) and The Lady Eve also being released in 1941. She is the complete ball of fire, bewitching, bothering and bewildering the nutty professors and entertaining us all royally in the process. De-lightful. 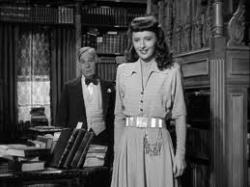 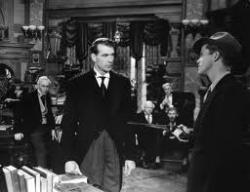 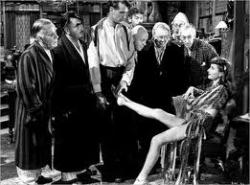 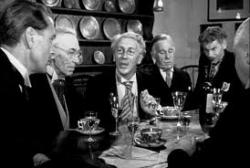 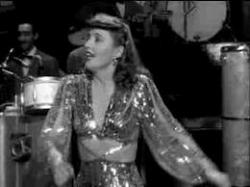