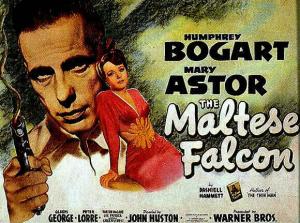 'I completely storyboarded The Maltese Falcon because I didn't want to lose face with the crew. I wanted to give the impression that I knew what I was doing.'
~ John Huston

After a peripatetic career leading up to a stint as a Universal contract writer in Hollywood John Huston gained some traction with his successful adaptation of High Sierra for Warners in 1941. His new contract featured a clause that enabled him to direct a relatively low budget feature and he settled on a property Warners owned and had filmed twice before to no real success, Dashiell Hammett’s The Maltese Falcon. ‘High Sierra’ had elevated it’s star Humphrey Bogart to first rung leading man and, as with that film, when George Raft turned down Huston’s debut Bogart was the next in line and fortuitously found one of the great roles of his career in a genre defining masterwork. Huston prepared meticulously, even engaging the help of his friend and fellow director William Wyler in asking for advice, and employing his father and Hollywood veteran Walter in an uncredited cameo. Mary Astor, fresh from a real life sex scandal was cleverly cast as the duplicitous Bridget O’Shaughnessy and first time screen actor Sydney Greenstreet was paired with the brilliant Peter Lorre to round out the casting to perfection.

The snappy opening has us in San Francisco’s office of Spade and Archer, a couple of gumshoes, when in walks Bridget, ’you’ll want to see this one’ Spade is informed by his long-suffering secretary Effie (Lee Patrick). Spade is spun a story by Bridget that doesn’t quite add up in his mind, but his partner Miles Archer crashes the meeting and agrees to go to the location that night and check out the dangerous Floyd Thursby she mentions. Archer is promptly and unceremoniously killed, and Spade shows little sentiment also when later questioned by his cop friend Detective Polhaus (Ward Bond). Spade dodges Archer’s widow Iva (Gladys George), with whom he’s been having an affair, and Bridget shows up again begging for help. Spade tells her she’s not believable, ‘we believed your $200’, but warily agrees to continue on the case, now needing also to ensure the police suspicions pointing towards him as Archers killer are kept in check.

Huston then introduces Joel Cairo (Peter Lorre) into the mix, astonishingly for the time an obviously gay character, and the first to mention the ‘black bird’. Soon Spade is in deep in an even more complex web of intrigue and lies, but attracted to the pleasures of the flesh with Bridget, who he knows is using him but plays along anyway, and we’re unclear if it’s compulsively or calculated, perhaps he is too? The Fat Man, Kasper Gutman (Greenstreet) and his psycho sidekick Wilmer (Elisha Cook Jr) are added to the mix and soon all are fevered by the perceived proximity of the legendary bejeweled ornament, Spade himself getting all glassy eyed when he thinks he has his hands on it at last. Like all of Shakespeare’s tragedies the entire cast come together at the denouement, however where the Bard was happy to have most of his characters die, here they merely attempt to sell each other out or double cross each other at every turn, that’s living. Spade, as if emerging from a dark hole, finally breaks the combined power of the hold of Bridget and the ‘bird’ and does the ‘right’ thing in revealing her as Archer’s killer. The motley remnants merely put the disappointment of getting so close to the black bird behind them and go off to continue tilting at windmills.

Bogart’s Spade has one redeeming feature, which allowed Huston to get the script past the censors and give the audience something to hang on to where in reality Bogie was playing a wife stealing, cheating, using, greedy bastard! The Bogart screen persona was heavily defined here, a tough guy who has rough edges, but when push comes to shove he’ll make the ‘moral’ choice, even if it’s a relative one. Spade had no great love for Archer, and may have been happy to help himself to his wife’s charms, but ultimately behind his indifference he knew there was an ironclad code, he articulated it thus ‘when a man’s partner is killed, you’re supposed to do something about it’. The ‘stuff that dreams are made of’ may be diverting, but in the end it’s no match for the code, it’s almost Darwinian in the sense that Spade does it for Archer as he knows it would be done for him in his place. It’s the closest thing Spade has to a core philosophy, for a belief that shields him from the grimy reality of the dark streets he walks, and the dark hearts he deals with daily.

Hammett had seen more than enough of the seedy side of humanity during his stint as a Pinkerton detective in San Francisco and wrote his lead character Sam Spade as more ‘anti’ than hero, and in bringing him so convincingly to the screen Huston and Bogart created a prototype for the new tastes that would emerge post WWII, mostly pushing the limits of amoral characters in a supposedly coded and moral universe. The French had some catching up viewing to do with American cinema once Europe was liberated and were surprised to see the dark tones that had emerged in some of the more gritty corners of the Hollywood myth factory, christening this new direction Film Noir. A rough consensus seems to have developed that marks the beginning of Noir with Huston’s debut, and even if that’s an arbitrary line at best, who can argue? The ‘movement’ had its antecedent in the moods of German Expressionism and French Poetic Realism, but really was just a natural evolution from Hollywood’s street tough gangster films of the 1930s. Huston was, like Welles and others who were re-defining the language of cinema in the early ’40s, standing on the shoulders of giants. 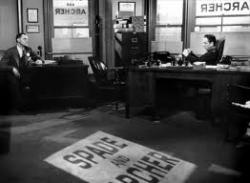 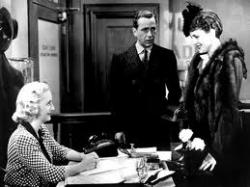 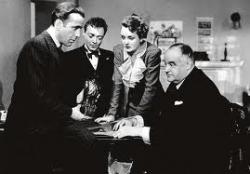 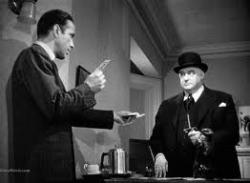 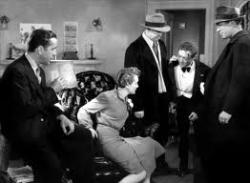