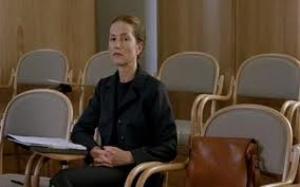 Self loathing in B flat minor

In Michael Haneke’s The Piano Teacher, he essays the strange contradiction between the beauty of classical piano music in the hands of a trained concert pianist and brutal regime of practice, discipline and occasional psychological torture needed to achieve such remarkable results. Haneke delivers the morality tale with his usual dispassionate eye, and teams with Isabelle Huppert for the first time, the pre-eminent actress of the age (sorry Meryl!) to bring to the screen the manipulative and sexually dysfunctional Erika, in a performance tour de force. Haneke adapted the screenplay from the novel by Elfriade Jelinek,

Erika is a middle-aged piano teacher, making a modest living taking students and sharing her Paris apartment with her elderly mother. The pair endure a fractious relationship, the mother obsessing over many minute details of Erika’s life and interrogating her every move. Erika meets Matthew, a handsome young man who becomes besotted with her, who also plays piano superbly, but is dismissive of his gift and sees it only as an avenue for seducing Erika. Matthew attempts to be taken on for private lessons by Erika, but he soon finds he has more than he’d bargained for in the sado-masochistic behaviour of his new love. Erika becomes more erratic and unpredictable as the relationship intensifies.

Haneke uses his familiar framing devices, providing a distance and angularity to our perception, shooting the action outside an open apartment door for example, when most directors would simply cut to a shot inside the room to propel the action. Haneke’s peerless ability to hold a take until it challenges the viewer's level of comfort, to create a hyper-real and disturbing ambience for the narrative to work, is again employed to great effect. Assumptions of what we’re witnessing become redundant as Erika constantly surprises and subverts our expectations, allowing Haneke to simply frame several questions, what created this? What forced her out onto the edge? Question to which he typically offers no solutions. Erika is a conundrum in which Haneke revels, the contrast of the high culture end of her experience clashing and contrasting markedly with the low brow, sex-shop milieu into which she sinks at every opportunity.

The film gives us Erika as an emotionally isolated woman, living in a dysfunctional relationship with her controlling mother, and unable and unwilling to accommodate the wider world on any other than her own demanding terms.  Erika condescends at every point, feeling superior and unrecognised for the ability she has, having to channel her remarkable gift into the mundane pursuit of teaching spotty schoolkids rather than being feted on the world’s concert circuit. The frustration has built a wall around Erika, and she lets herself ‘feel’ by indulging in behaviour that sits well outside societies acceptable norms. Matthew shatters her ‘wall’ by matching her ability as a virtuoso and is therefore an ‘equal’ in her mind, someone she can connect to at last. Unfortunately Erika’s ideas of connection have been perverted by years of aberrant, narcissistic behaviour, and the results of the liaison are shattering.

Erika struggles with the time honoured battle between the immanent and the corporeal, between the flesh and the mind. She asks herself, “What is this foolish desire driving me out into the wilderness”? Haneke shadows the dilemma by references to Schubert, Erika’s speciality composer, and to Schubert’s struggle with mental illness, his “twilight of the mind” as she puts it. She describes one piece he’d written in poignant terms, “He knows he’s losing his mind, but he clings on one last time”. In some sense Erika is afraid she’s losing her own mind too. Another motif Haneke employs is the gradual loosening of Erika's hair, as her stiched up demeanour starts to fray at the edges as she emotionally allows herself to reveal to Matthew what she has previously hidden to the world.

In a diversion from the novel, Haneke avoids a flashback to Erika’s childhood by the shorthand technique of showing a ‘showbiz’ mother and daughter as one of Erika’s students. Haneke pointedly shows the kind of abuse that young pianists suffer from their parents and teachers in order to push through to the competence required to master the incredibly difficult repertoire. Haneke allows the contention that we create an environment for psychological problems to fester at our peril, and that the adult Erika was not formed in a vacuum, rather moulded into the mass of tensions and contradictions she represents.

The Piano Teacher is another tour de force for Isabelle Huppert, and one in a series of definitive triumphs that marks the Frenchwoman as one of the finest screen actors in modern times. In 1978 she won her first best actress award at Cannes for Violette Nozière, a Claude Chabrol film, and in 2001 she deservedly repeated the dose for The Piano Teacher. Huppert’s ability to reach deep inside herself to areas of brutal insight belie the fragile appearance and light frame, as evidenced by the beyond-brave roles in Christophe Honoré’s , Ma mère, Claire Denis’ White Material or Chabrol’s La Cérémonie, to name a few. She worked with Haneke a couple of years later in the superior Time of the Wolf, and added a tasteful support to his masterful Amour.

Michael Haneke has no peer in modern cinema, his vision and commitment creating a body of work which will stand with the best of all time. The Piano Teacher, a shattering masterpiece that moves beautifully from pianissimo to crescendo will be at the top of that very exalted list. Bravo maestro! 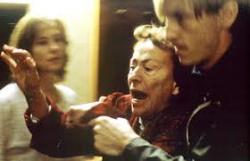 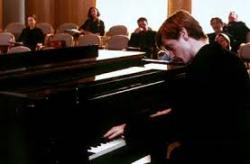