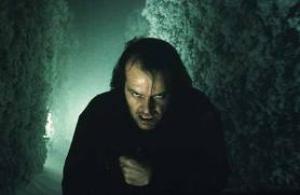 "I think the unconscious appeal of a ghost story, for instance, lies in its promise of immortality. If you can be frightened by a ghost story, then you must accept the possibility that supernatural beings exist. If they do, then there is more than just oblivion waiting beyond the grave".  - Stanley Kubrick

Stanley Kubrick's masterful interpretation of Stephen King's horror classic has become a touchstone of how cinematic terror is treated, much copied and seldom equalled since it roared onto the screen in 1980.  Kubrick was devastated by the box office failure of his Napoleon replacement piece, Barry Lyndon,  and felt he needed a commercial hit again to secure his future as a bankable director. In the late 1970's he went to ground, coming out long enough to work with sci-fi writer Brian Aldiss on a property relating to Kubrick's fascination with artificial intelligence that would eventually be filmed by Stephen Spielberg as A I.  Warner Brother's acquired the rights to King's novel and as Kubrick had read it and liked it he opted for a 'horror' film, his first. Kubrick followed his own practice of distilling a source novel to its essence, and in doing so left out enough detail from the novel to have Stephen King dislike the film, blaming Kubrick as a man, "who thinks too much and feels too little". Jack Nicholson, who was offered the role of Napoleon in Kubrick's aborted project on the French Emperor, was cast as the writer Jack Torrance, and unleashed one of his most 'Jack' performances of all, burning this manic version of his persona into the cinematic retina's of the movie going world for all time. Next stop parody.

Jack Torrance is a writer who hopes to do his best work in isolation while taking a winter caretaker's job at the Overlook Motel in Colorado. Jack is warned about the possible effects such isolation can have on the mind by the resort Manager, 'solitude can become a problem', but Jack insists they'll be fine, as Dick (Scatman Crothers) the resort chef finds he has some supernatural abilities, which he calls the 'shining' in common with Jack's young son Danny (Danny Lloyd). Jack's wife Wendy (Shelley Duvall) and Danny accompany him for the duration, and for the most part they are the only people there, and once a severe storm hits the region they are completely cut off for a time. Danny starts to have flashes of other people appearing at the hotel, including young twin girls, as Jack becomes hostile and distracted the longer the stay lasts. Soon Jack and Wendy are having visions of other people too, possibly relating to a tale Jack was told of a previous caretaker who went mad and chopped his family to pieces with an axe. Jack's descent into madness soon has Wendy stepping lightly and Danny running for cover.

One of the points of departure from the novel that irked King was Kubrick's diminishing of the supernatural components as he saw them, and here's the rub, because in Kubrick's eyes the supernatural elements were enhanced! What to think? Kubrick downplayed the writer's alcoholism, to King's chagrin, because he felt that made it less likely to be all a drunkard's imagination. King favoured the idea of evil being anthropomorphised in the actual hotel itself, Kubrick's evil seems to lurk within the people, and if Danny has the ability to tap into supernatural apparitions, then his parents might have it too? This makes the film have more in common with the psychological terror of Jack Clayton's brilliant and chilling The Innocents  with Deborah Kerr, rather than the blood soaked interpretation of King via De Palma's Carrie.  It's Kubrick's colourful update on the haunted house trope, The Innocents  meets The Haunting.

Kubrick departs from the gothic horror look and feel of the cinema that films like The Innocents  and The Haunting represented, in a number of ways, especially in the vibrant colours of the garish '70s decor, and in the movement of the characters through the long corridors. Danny hares around the halls at breakneck speed, and Kubrick tracks him via the then brand new Steadycam technology, operated by its inventor Garret Brown. He uses space in a way that amplifies the disconnection the family feel, and he virtually never films them as a trio when they are in the hotel. He establishes the utter remoteness of the location via some spectacular opening helicopter shots and the feeling of being out on the edge of civilisation gives context to the extremities of Jack's reaction. Kubrick doesn't so much stage a series of events surrounding Jack's deterioration, he makes it impressionistic, it's felt more than shown. The pre-figuring is done also with Danny asking Dick, during their 'shining' talk, "Is there something bad here"?  Jack warns Wendy things are not right via a nightmare he relates to her, "I dreamed I killed you and Danny",  as he seemingly struggles with his demons.

Danny's entry into the paranormal world is via 'Tony', his invisible friend, who speaks to him as a finger puppet. The 'possessed' child metaphor is an old one, and was notably made into a mega hit via Friedkin's The Exorcist, a few years prior to Kubrick's attempt.  Tony shows Danny things, and the bad things that happened in Room 237 eventually lure Danny and then Jack inside to investigate. Tony tells Danny of Jack's murderous intent, Kubrick employing Tony's other worldly voice to repeatedly intone the word "redrum"  as a drone, before the mirror gives up the secret. Jack's demons materialise in the shape of a cultured butler called Grady, who tells him that, "I've always been here, and you've always been the caretaker, Sir",  and goes further to relate that he too had experienced wife trouble, just as Jack was dealing with, but that he fixed it, "I corrected her".  Later he berates him for his failure in not 'correcting' Wendy, "Your heart is not in this"?  but Jack asks for one more chance and soon it's "Here's Johnny"!  Dick senses Danny is in trouble, because of their 'shining' connection and battles through the snowstorm to attempt a rescue. Jack stalks the corridors, as a slow motion, zombie version of Danny, as Wendy sees the same blood tsunami vision washing through the halls as Danny had seen before. Kubrick builds the tension as all the threads coalesce and Jack pursues Danny into the now snow filled maze, more symmetrical tracking shots with human shapes interrupting the linear flow of the image, visually dissociative and disturbing.

Nicholson delivers one of his iconic performances in the part of the jobbing writer, Kubrick extracting every ounce out of him via a gruelling multi-take approach, 'gives a whole new meaning to the word meticulous', was how Jack recalled working with Stanley. Duvall is fine and not overused in the part of the tremulous Wendy, and she had her problems with Kubrick on-set which affected her health for a time. Danny Lloyd is great as the kid, hitting the right notes with his round angelic face. Kubrick's clinical eye is much on show, but shunting the tone towards the psychological helps the audience suspend its disbelief.  The shining concept came from the John Lennon song, Instant Karma, and its anthemic chorus, "we all shine on, like the moon and the stars and the sun",  and speaks to a mystical connection of human 'souls'. Kubrick's affirmation of the 'shining' itself, rather than playing up the 'evil is in the building' King concept is actually a strength, allowing an area of ambiguity in the interpretation.

Nicholson also noted that Kubrick's films were usually given either a critical or public mauling before being accepted after a period of reassessment as works of genius. The Shining  falls somewhere between the two for once, as critics were mixed but audiences loved the claustrophobic thrills and chills. The film is a vigourous essay on isolation, on solitude and the struggles of an artist who's suffering writers block, but it's witty and adventurous with it. It doesn't devalue the horror genre by playing to easy tropes, it expands on the language of the form, which is something Kubrick managed to do several times in his singular career. The Shining may not be the perfect film for a pandemic induced isolation, given the concept of an outside evil permeating even the splendid isolation of the mountain fastness, but it's a fun ride all the way.
The film is a triumph of visual acuity, set design, acting and mood, The Shining  is that rarest of things, a classy horror film. 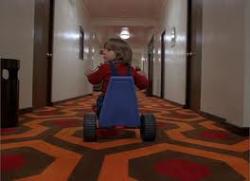 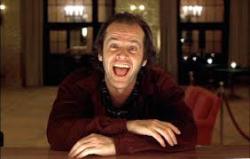 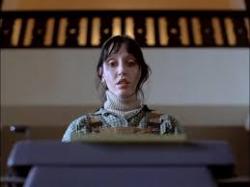 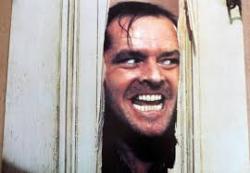 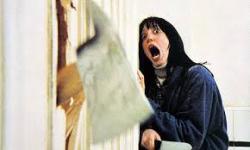 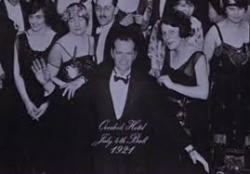