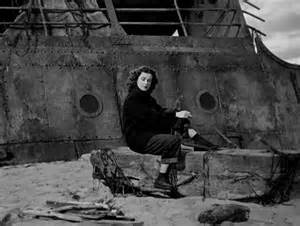 The Woman on the Beach

"I was born with the itch to tell stories. When I'd wail in my cradle, it was in hopes of attracting an audience. " ~ Jean Renoir

This has historically been a very hard film to track down, the last in Renoir’s American period, but it’s worth the effort. A psychological film from a man who disliked such concepts, and a film that was frustratingly re-edited (about 1/3rd of the original was cut) and re-shot in part by an unsympathetic RKO unsure, like the rest of Hollywood, of how to handle Renoir’s talent. The project had its genesis in star Joan Bennett's desire to work with Renoir, having re-made one of his French films (La Chienne) with Fritz Lang under the aegis of her production company, Diana Productions. Val Lewton was producing the version of a story called None So Blind and opposed Renoir's appointment, but nonetheless attempted to co-write a version of the screenplay with Jean before moving on to another project and leaving Renoir to it.

It’s a film that has echoes of noir, poetic realism and elements of what Buñuel would later explore in a cinema of dream and desire. Renoir co-wrote the finished script with Frank Davis and the theme of a painter going blind and coming to terms with his past was obviously a resonant one for him. Renoir cast the film effectively, using RKO star and under-rated actor Robert Ryan as the central character and Charles Bickford as the doomed painter, "A painter who has gone blind is a dead man". Joan Bennett, sizzles as the femme fatale who messes with the painter's mind and Ryan's body - Renoir framed it thus "I wanted to make a film about sex... in which reasons for attraction were purely physical, a story in which sentiment would play no part at all." It’s a brutal examination of isolated people struggling to come to terms with their needs and desires, struggling to come to truly know their true self.

Robert Ryan plays Scott Burnett, an ex navy Lieutenant now serving in the Shore Patrol, who is suffering recurring nightmares involving drowning. The War Office has given him a clean physical bill of health but his scars are mental and unseen as he attempts to live a normal life with his good girl fiancé Eve (Nan Leslie). Renoir uses a dream/nightmare sequence that has Scott at the bottom of the ocean, stepping over the bones of the comrades from his ship that was torpedoed in the war, and embracing his fiancé only to see her burn before his eyes. Renoir would have no doubt been aware of the many GI’s who came home from WWII in bad mental shape and puts that contemporary dilemma at the centre of the film. Scott is a man isolated from society, the distance created by his war experience, as he struggles to make sense of his position in a post war world. Scott encounters a mysterious and beautiful woman on a beach one morning as he’s riding his horse, and already Renoir is playing with an odd iconography, the knight and the damsel motif subtly established in this surreal setting. The damsel, Peggy Butler (Joan Bennett) is in distress, a seemingly unhappy marriage to blind artist Tod Butler (Charles Bickford) being the source of her misery. Gathering wood for a fire, symbolising a link to Scott’s nightmare, Peggy tells Scott "it’s a hard thing to know yourself". Scott meets Tod, who treads warily around the younger man’s attention to his pretty young wife and immediately Scott’s already fragile world starts to be pulled asunder.

Scott soon finds himself a pawn in a game played between the husband and wife and what starts out as natural attraction between to two younger protagonists soon morphs into something more sinister. Tod is trying to hold on to the young woman he still sees, and he keeps old portraits of a younger Peggy under lock and key, unable to part with them even though they could use the money. Scott doesn't understand art, and an underlying tension is created by the 'action' man soldier playing off against the troubled artist with an inner life of the mind. Tod tells him, "There's nothing to understand, it's all in the eye, painting is like a woman, she either thrills you or she doesn't." Scott is plainly thrilled by Peggy, and he thinks Tod knows it, even doubting he's blind at one point. The couple secretly meet at the wreck on the beach, symbolic of the future that awaits them, and Tod intuitively knows that Peggy is drawn to Scott, they argue and Tod tells her she's "so beautiful outside, so rotten inside."

Scott is torn between the love of the 'good' girl in Eve, or to share a pact with Peggy that could end up in them killing Tod to get him out of the way. Scott in his weakened mental condition struggles to discern the real from the 'surreal' and Renoir reinforces this with his atmospheric settings and moody staging. Peggy is frustrated by Tod's 'writer's block', essentially code for his impotence, yet in Scott she finds a man rendered equally impotent by his mental anguishes, he's also a contradiction, i.e. presenting as something on the outside (normal) as opposed to the turmoil and tortured ugliness that lies on the inside, and his 'life of the mind' is equally as tortured as Tod's. Peggy acts as the catalyst for both men to regain potency after a potentially disastrous but cleansing event.

Renoir must have been reminded of The Postman Always Rings Twice in the doomed love triangle, a book he recommended to his friend Luchino Visconti, that Visconti filmed as his debut Ossesione. There are resonances with the driven lovers in Renoir's Zola adaptation La Bete Humaine as well, but the angle of having an artist as one of the protagonists must have been the clincher. Renoir certainly delivered a noir-esque piece, attuned to the times in retrospect, even if it was under appreciated upon release. The film was taken out of Renoir's hands after it tested badly and was re-worked to a degree but still flopped at the box office. Renoir may have been an idealist as an artist but something of a realist in the way he measured the success of his films, applying the traditional Hollywood measure of profitability when gauging the relative merits of his output.

The theme of an obsessed artist having to free himself to overcome his 'blindness' was soon lived out by Renoir, who shed the trappings of Hollywood to strike out into the unknown and return to work in Europe, by way of India, where he next made the remarkable The River. It's certainly possible Renoir was a victim of an unofficial 'greylist' then circulating due to his former support of leftist causes, and his composer on this film was Hanns Eisler who became one of the first blacklisted after the HUAC witch-hunts had had their way in 1947 and 1952. Renoir found it impossible to get any other projects up in California and opted for a new life soon after this film opened, working abroad but still a US resident, though it's certain he would have been targeted by HUAC, like his good friend Charlie Chaplin, had he tried to find work in Hollywood. After his interesting American period, the glories of his colour era beckoned the great artist of cinema. 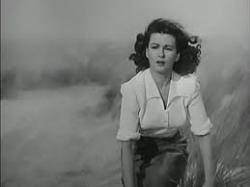 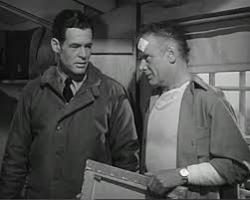 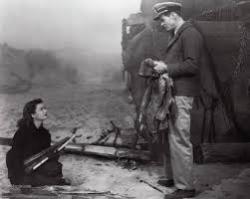 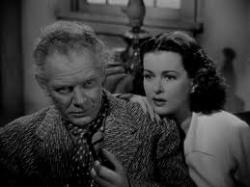 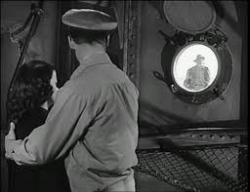