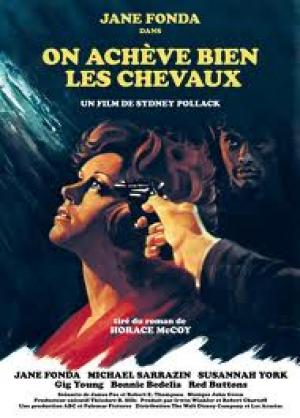 They Shoot Horses Don't They?

"Stars are like thoroughbreds. Yes, it's a little more dangerous with them. They are more temperamental. You have to be careful because you can be thrown. But when they do what they do best - whatever it is that's made them a star - it's really exciting".
~ Sydney Pollack

Sydney Pollack was at the beginning of a great if uneven career as a mainstream director when he produced this downbeat existentialist gem set in the depression years and centred around the bizarre world of marathon dance contests. After being championed by his friend Burt Lancaster, with whom he'd made two films as director-star, Pollack found his voice in socially conscious and liberal leaning topics and became one of the most effective American directors during the period of the American Renaissance. Horace McCoy's novel They Shoot Horses Don't They?  was written in 1935 and formed the basis of the film, Jane Fonda having input into the script and her character of Gloria. The film rights were once owned by Charlie Chaplin and Norman Lloyd but their project, with Marilyn Monroe in the lead, fell through in the early '50s after Chaplin went into exile in Europe following accusations of communism during the blacklist period.

Robert (Michael Sarrazin) is a wide eyed and naive young man bumming around Hollywood in the early '30s hoping like many others for some vague dream factory success. He stumbles into the preparations for a dance marathon and agrees to pair up with Gloria (Jane Fonda) after she loses her partner before the start. The contest offers a prize of $1500 and 140 couples start the gruelling event where the winner takes all. We meet Alice (Susannah York) a would-be Jean Harlow glamour actress, and Sailor (Red Buttons) an older dancer, as well as a young couple James (Bruce Dern) and his heavily pregnant wife Ruby (Bonnie Bedelia). The contestants hope for Hollywood scouts to 'discover' them, of to make money from sponsorship of interested spectators. As the dance continues Robert and Gloria get to know each other, and as other couples fall by the wayside they get through to the last 7 pairs.

The novel was a hit with the French existentialists in the '30's and it was Fonda's then husband Roger Vadim who encouraged her to pursue the role of Gloria. She found working with Pollack a great experience as he wanted her input into how she saw the character and adapted the script accordingly. Fonda's performance is one of the great modern characterisations and pointed to a modern screen woman, ironically in the form of a depression era character. Gloria's cynicism is breathtaking and necessary, as she unashamedly calls the charade for what it is, cheap exploitation of other people's pain. When one of the women suffers a nervous breakdown in the change rooms during a rest she tells the oily master of ceremonies, Rocky (Gig Young) "I figured you'd put her on display and charge a little extra", to which he replies, "no, it's too real". She addresses the great existentialist question of death in relation to cognition when she is told how cattle are slaughtered, "They don't know it's gonna happen, puts 'em one up on us".

Fonda gives a brittle and measured performance and set the ground for a string of signature roles as she ascended to the top echelons of her profession. After the strange departure of Barbarella, made to please her husband, director Roger Vadim, she inhabits Gloria with an intensity that finally matched the fullness of the role on offer. This new sense of purpose soon transferred to her personal life as she returned to America to become a political activist in between some stunning film roles. Fonda proved herself here and grew into a new maturity, worthy of her daunting heritage as the daughter of an acting legend.

Pollack was an actor before he became a director and his handling of what is an ensemble piece is sure and clear. Gig Young gives an Oscar winning turn as Rocky, milking every drop from the role as the MC just as desperate as many of the contestants. It's a role that could easily lapse into caricature and it's a tribute to his skills and Pollack's direction that it does not. Susannah York is brilliant as the clinging Alice, hoping for her Hollywood break and not able to see how she's being chewed up and spat out in a Darwinist contest of survival of the fittest. A sad postscript was played out in 1978 when the heavily alcoholic Gig Young killed his wife and then committed suicide.

Misery as entertainment is not a new thing, as evidenced by this keening look into the plight of the working poor in the '30s. Japanese game shows and the recent spate of post Springer reality gruel merely update the spectre of a crowd wanting its winners and losers to be paraded before them, its blood lust never far from the surface. Capitalism has a dark heart and it's not pleasant to have it taken out and paraded in the light, it's confronting and disturbing. The American Renaissance was thankfully a time where reality and rawness were not necessarily abjured in favour of bland consumer friendly product, even though there was still plenty of that, and not many times has Hollywood had the guts to create a film like They Shoot Horses Don't They? and do it as profoundly as here. 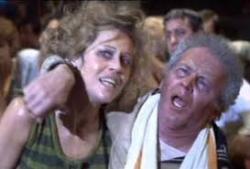