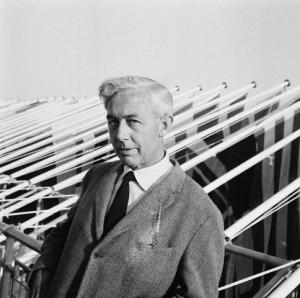 “My movie is born first in my head, dies on paper; is resuscitated by the living persons and real objects I use, which are killed on film but, placed in a certain order and projected onto a screen, come to life again like flowers in water.” ~ Robert Bresson

A true one of a kind filmmaker, Bresson stands at the intersection of film and art and has few equals in the realms of personal cinema. Starting after the Second World War, where he was a prisoner of the Germans for a year (a story he later examined in the brilliant A Man Escaped) Bresson collaborated with Jean Cocteau for his debut, but after that he eschewed convention and eventually developed his own set of aesthetics and rules.

"Film can be a true art because in it the author takes fragments of reality and arranges them in such a way that their juxtaposition transforms them ... each shot is like a word, meaning nothing by itself ... (it) is given its meaning by its context." ~ Robert Bresson

Bresson stripped back the Italian method of Neo-Realism, itself a stripped back mode of creating films, and manufactured moods unlike any other filmmaker before or since. He even treated his non actors as 'models', making them deliver lines in a neutral fashion, devoid of histrionics or any discernible 'acting' and the results are mesmerising in the hands of this master. Bresson unearthed a kind of existential truth that took ideas of Bergman or Kurosawa even further, "Don't run after poetry. It penetrates unaided through the cracks" Bresson said, and in film after film he conjured poetry from the everyday.