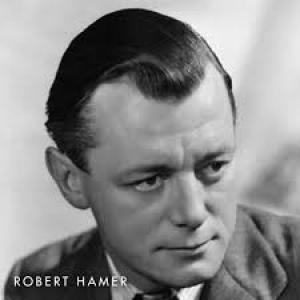 'A film is never really good unless the camera is an eye in the head of a poet.'
~ Orson Welles

Robert Hamer is one of the ‘almost’ stories of British cinema. His reputation exits almost solely and unfairly on the basis of his one, undisputed masterpiece in 1949, Kind Hearts and Coronets, but his modest output has several gems that deserve wider appreciation. He was born in 1911 and by the early 1930s he was working in the film industry in a variety of menial roles. He rose to become an editor for Charles Laughton’s production company and worked on Hitchcock’s and Laughton’s 1939 effort, Jamaica Inn.

Hamer joined Ealing Studios in the early 1940s and after editing a couple of run of the mill projects, he was given the opportunity to produce and then direct, making his directing debut with a section of the brilliant anthology film, Dead of Night, which was a big hit for Ealing. On the back of that success, he made his first full feature with the excellent Pink String and Sealing Wax, starring Mervyn Johns, Gordon Jackson and Googie Withers. Hamer had a fine facility and love of the English language and, as with most of his films, he worked on the writing aspect of Pink String and Sealing Wax and helped to adapt the piece from a stage play by Jon Pertwee.

After some uncredited work covering for an ill Charles Frend on The Loves of Joanna Godden, he directed the very fine ‘poetic realist’ It Always Rains on Sunday, starring Googie Withers and John McCallum. The film was stunningly shot by Ealing stalwart Douglas Slocombe, who collaborated on several Hamer films. Hamer, as David Lean also displayed in Brief Encounter, seemed to owe a debt to the French Poetic Realists in much of his best work, and it may not be a coincidence that he shared some of the key aesthetics of Marcel Carné, also a gay director in an era where homosexuality was marginalised or criminalised. Hamer was also an alcoholic who struggled with the addiction his entire career and it created many issues with his co-workers, as testified by the star of several of his best films, Googie Withers - “Robert Hamer was a very good director… he was a funny man, and although he made wonderful films he was a very unhappy man and he was a drunk. He died too soon because of it, but then he was a drunk and he had nobody who cared for him, it was all very sad.”

Hamer also struggled to get the kind of projects he championed green-lit at Ealing, a studio known for broader comedies and clever satires, but his next film would prove to be his most successful, Kind Hearts and Coronets, a darkly bleak satire on the aristocracy. It was a measure of the difficulties he faced at Ealing that after his finest hour he made his next film for another studio, Mayflower Productions, a tense war-time drama starring Eric Portman called The Spider and The Fly. He returned to Ealing and brought Portman with him to star in a comedy, His Excellence, but the execution fell flat, and the film did not inspire. Hamer worked for Rank next and produced one of his finest efforts with the atmospheric Brit Noir, The Long Memory, starring John Mills.

The star power of Alec Guinness allowed Hamer to get Columbia Pictures to finance his adaptation of G. K. Chesterton’s Father Brown, and he reunited Guinness with his old Coronets co-star Joan Greenwood for a great critical and commercial success. The pairing of Guinness and Hamer continued in 1955 for Two Cities Production’s To Paris With Love, a slight technicolour comedy that is more well regarded in later years than at the time. After a break from features and some bridging work in TV, he returned in 1959 for his old producer friend Michael Balcon, and they coaxed Alec Guinness to star opposite Bette Davis in The Scapegoat, a Gore Vidal adaptation of a Du Maurier source novel. Hamer’s drinking problem had all but derailed his career by the time he came to make his final film, School For Scoundrels, starring Terry Thomas, Ian Carmichael and Alastair Sim. Hamer was incapable of finishing the film and an uncredited Cyril Frankel helped out. Robert Hamer died two years later at the age of 52.

Robert Hamer carved a small and idiosyncratic niche in a British film world that really had no place for him. He was a capable wordsmith, had an assurance with image and narrative and a clear-eyed cynicism that wasn’t right for the Post-war mythology that Britain required. He didn’t have the odd Englishness of Powell, the deep poetry of Reed or the linear clarity of Lean, but he had something of them all. Robert Hamer left a small, but startling legacy and lost of his unknown films should be ripe for reappraisal. His best work is not only archly poetic, visually sophisticated and sparkling with wit, he anticipated by a decade the kitchen sink realism of the late 50s and the embracing of the extraordinary within the ordinary of the British New wave directors like Tony Richardson and Karel Reisz.

Some of his philosophy on film is summed up on some comments he made about his best film -
‘It became evident that we had a subject with most agreeable possibilities. What were the possibilities that thus presented themselves? Firstly, that of making a film not noticeably similar to any previously made in the English language. Secondly, that of using the English language, which I love, in a more varied, and, to me, more interesting way than I had previously had the chance of doing in a film. Thirdly, that of making a picture which paid regard whatever to established, though not practiced, moral convention.'
~ Robert Hamer on Kind Hearts and Coronets