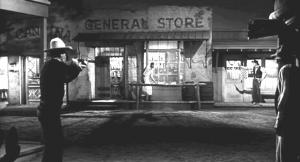 The Man Who Shot Liberty Valance

"But I was so much older then, I’m younger than that now" Bob Dylan

John Ford was dismissive of filming in colour, claiming it took no special talent to achieve results, but apart from the fact much of his whole personal philosophy involved denigrating his art to hide his own insecurities, it’s clear that he strongly felt ‘real’ photography needed to be in black and white, that it’s hues and shadows were a greater challenge with which to tell a story, but wherein lie higher truths. It’s a maxim Jean Renoir distilled as ( and I paraphrase) "we don’t get a deeper understanding of reality by showing it as realism, we gain another level of insight by showing reality poetically". Black and white rendering by it’s anti-realist nature is almost by definition poetic, forcing us to examine issues obliquely, a message that resonates back to Ford’s silent era roots and masters like Murnau and Von Sternberg. To this degree Ford’s serio-comic ‘The Man Who Shot Liberty Valance’ can be seen as a poetic-realist western, and one of Ford’s definitive black and white masterpieces, as in it’s shadows and poetry Ford delivers a eulogy to a mythic bygone era, ironically one that he’d help create in the first place.

In 1910 Rance Stoddard (James Stewart) an important politician is returning to town with his wife Hallie (Vera Miles) for the funeral of an old friend. The press get wind of the event and want to pry from him the reasons he’s come back. Rance proceeds to tell of the days he first came west as an ambitious young lawyer and of the town as it was then. What unfolds is the tale of progress, of the taming of a wilderness and a ‘wide-open’ town like Shinebone, of the collective will of the electorate triumphing over the vested interests of the cattle barons and their mercenary thugs like the outlaw who held up Rance and beat him to a pulp as he journeyed to the town. Rance eventually also reveals that the event that his popularity was built in, that he’d eventually faced down the outlaw and killed him, was a lie.

Ford sets us up for the title phrase pay-off by staging the entire production at an almost theatrical level. He avoids painting his great landscapes and exteriors and instead is intent to focus our attention on the dilemma of civlisation, as represented by the law an Rance, versus chaos and brutality, as represented by Liberty Valance (Lee Marvin). Ford contrasts these extremes with a character who has a foot in both camps, Tom Doniphan (John Wayne) who’s tragedy is he can never fully belong to either. Tom recognises the darkness in himself, the thing that enables him to fight Valance’s brutality with an equal force, but at what cost?  If we become the monster in order to kill the monster there are consequences, and for Tom it’s the possibility of a future in a world he’s going to have to stand aside for. Rance denies the violence inside him, preferring to promote the ideals of education and democracy as the way to providing a decent future, but when he’s forced into fighting back against all his principles he’s confronted with the paradox of a lawyer taking the law into his own hands.

Coming between the two men is Hallie, who Tom is plainly in love with and he warns the lawyer off, as Tom is as aware of Hallie’s growing affection for Rance as Rance is unaware. Hallie eventually makes a pragmatic choice, she chooses Rance,  the man who represents the future as against Tom, the one who represents the past. What Hallie lost is made clear in a touching scene as Link (Andy Devine), the old Marshal, takes her out to Tom’s old burnt out homestead, , and she’s sees the cactus roses in bloom, like the one’s he once gave her. The reason the home is burnt down is linked to the shootout, as Tom’s actions help cost him the love of his woman, and he went on a drunken bender and set fire to the home where he was building an extra room for her, with himself in it, symbolically purging himself of his past, and equally denying himself the future he’d planned. Hallie has, by this stage. lived a remarkable life as wife of an important man, and has traveled the world, but in placing a desert rose on Tom’s coffin she’s admitting the life she chose was a pale compromise in the place of an ‘authentic’ life with Tom.

Rance is an example of an idealist running head on into a place where ideals are a luxury. Rance takes to teaching the residents about history and how to read and write, and encouraging the newspaper man Peabody (Edmund O’Brien) to take a stand against thugs like Valance. The law as represented by the impotent and comically inept lawman Link is useless and Rance helps galvanise the collective will of the people to defeat Valance. Tom is a realist, and encourages Rance to get handy with a gun, instinctively knowing only a bullet will end Valance’s murderous rampages. Rance finds the courage to face down Valance, but Tom acts against his own principles, secretly intervening in an unfair contest, and Rance acts against his own principles by enjoying the fruits of his new reputation and not setting the misconception straight. Both are pragmatic decisions, and both carry moral paradox’s which challenge their world view’s and leave the two men conflicted. Tom goes on to die in abject poverty while Rance enjoys fame and fortune on the back of a myth.

Ford’s visual mastery of the narrative is on show at all times, but it reaches it’s eloquent zenith with the shootout scene. The street is darkly shot and eerily lit and Valance isn’t clear exactly who’s coming out of the shadows to face him, and the Rance that does emerge may indeed be the noir doppleganger of the decent lawyer, forced into becoming something he’s ashamed of in order to preserve his honour in front of Hallie. Valance is a brute and one of the more violent of all Ford protagonists, and Marvin’s muscular and intense portrayal lifts in into being one of the most memorable of all western villains.  Stewart and Wayne are a little too old for their parts but that poses no real issue as they embody completely all that’s required and the shorthand history that each can invest into their characters by dint of their remarkable careers adds another dimension as we are watching mythic stars rather than actors. Ford’s stock characters fill the other roles competently with John Carradine a hammy stand-out in a political rally, and Devine reaching real depths as his old codger Marshal and fulfils the Falstaff-ian comic aspects well as the younger version.

Ford might have denied the art involved in his choice of work, but nevertheless it remains that his poetic side was the significant point of departure from all the other director’s he outgrew and outlasted. It’s possible he was addressing the contradictions in his own nature by working through these themes in his art, his wild and bullying compulsivity versus his poetic and sentimental ‘Irish’ heart, and would never be fully able to bring those elements into balance. Like Dylan’s poetic and pithy line from "My Back Pages’ a linear appreciation of knowledge and insight is not the whole part of the human equation, we can frame something in a counter-intuitive way, to turn a ‘fact’ on it’s head and yet it still speaks to us and we can get a whole new perspective on it. Ford understood this, and when he gives the newspaper the option to print the ‘truth’ the editor replies that the legend is the new truth. It’s a beautiful epilogue for Ford’s entire western output, and underscores the stories he’s framed and myths he’s helped service. A magnificent and greatly misunderstood masterpiece. 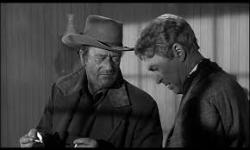 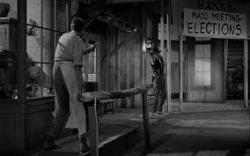