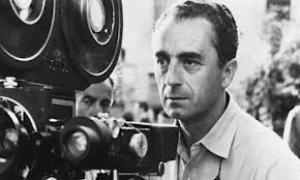 Antonioni came to prominence on the back of the impetus the Neo-realist movement afforded Italian cinema in the mid '50's. He found his métier in 1960 with his astonishing 'LAvventura', a sombre and meditative reflection on middle class ennui and alienation, and from there he produced two companion pieces in quick succession before leaving Italy and making films on the world stage. His first English language film was the remarkable 'Blow-Up' in London in the middle of the swinging '60's and he then captured something of the counter culture zeitgeist with 'Zabriskie Point', which was shot in America.  Antonioni's final English language film featured a superb Jack Nicholson performance in 'The Passenger' before he returned to Italy to make European films again.

Antonioni dared to bring a Bergman-esque reflective quality to very non-Bergman scenarios, (and apparently Bergman hated him) and in doing so helped push cinema into it's modernist phase, where silence and stillness are as potent as action and narrative. Antonioni's world is one of humans in existential crises, trying to make sense of an indifferent universe and to give meaning to their place in it.