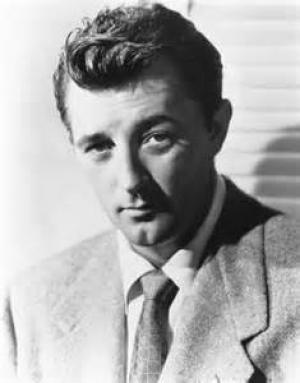 Out of the shadows, Noir man emerges.

”My close acquaintances, that's four people  - keep asking me where I am, who I am, and I tell them I'm an open book… but they all say, oh no, that I'm an island, an island they can't find”
~ Robert Mitchum

One of the great screen stars from the 1940’s to the 1970’s, Robert Mitchum personified a certain kind of laconic cool and defined the anti-hero for the post war generation. Connecticut born Mitchum got into acting in LA during the war and after a series of B-film villains he scored a standard 7 year contract with RKO, a small studio that had the knack of turning out quality work. Mitchum was on loan to United Artists for a William Wellman war film, The Story of G.I. Joe,  and the role landed him a Best Supporting Actor nomination at the Oscars, turbo charging his career. Blacklist victim Edward Dmytryk cast Mitchum in the excellent Film Noir drama, Crossfire  and Jacques Tourneur gave him one of the roles of his life in Out of the Past,  one of the finest films of the 1940’s.

Fine roles with A-list directors like Raoul Walsh in the excellent western, Pursued,  made Mitchum the star to watch, as did the very fine Robert Wise directed, Blood on the Moon.  Seemingly all set to become a huge star, disaster struck in the form of a drug bust for marijuana use in late 1948, but oddly the conviction and the gaol time only boosted his esteem in the public mind. Mitchum became the embodiment of the rebel in the eyes of the movie going public as he embarked on a series of hard boiled roles, making himself the premier male actor of the Film Noir  genre. Taut films like The Big Steal, Where Danger Lives  and His Kind of Woman  led the way but A-list directors again got the best out of the laconic actor, particularly Otto Preminger in the unusual Angel Face  and rugged western River of No Return,  opposite Marilyn Monroe. He was even a part of the final worthwhile effort from iconoclast Joseph Von Sternberg, (a director he fought with and had fired from the project by Howard Hughes) the ill-fated but stylish, Macao.

By the mid-50’s Mitchum was an anomaly amongst the 'new males', a throwback identifiable in a line from Gable and Cooper rather than a peer of Brando and Clift. He delivered one of his signature performances as the Reverend Harry Powell in Charles Laughton’s astonishing The Night of the Hunter  in 1955, before making a run of conventional war films. The Enemy Below, The Fire Down Below   were fine, if standard fare, but John Huston pulled a touching and nuanced characterisation from Mitchum with his odd fable of the nun and the marine, Heaven Knows, Mr Allison.   Another series of anti-hero, masculine roles followed, in good films like Thunder Road  and Home from the Hill,  before Mitchum branched out a little, replacing Gary Cooper in Fred Zinnemans’ The Sundowners,  because it represented a chance to work with his Mr Allison  co-star, Deborah Kerr again.

Mitchum found convincing roles harder to come by as he moved into a ‘character actor’ age group, but found one of his best villain parts in the J. Lee Thompson, psychological crime drama, Cape Fear.  Mitchum took a stand out part in Daryl Zanuck’a attempt to recreate D-Day, the epic The Longest Day  and Howard Hawks roped him in for a fine role in El Dorado, his loose re-make of Rio Bravo with John Wayne again in the lead. A string of tolerable and predictable westerns followed before David Lean cast against type to give Mitchum the role of the earnest and cuckolded school teacher in his fine Irish epic Ryan’s Daughter.

The 1970’s were a mix of fortunes acting wise, with the stand-out roles being found in Peter Yates’ superb crime film, The Friends of Eddie Coyle  and in Sydney Pollack’s Japanese gangster neo-noir, The Yakuza.  He also did superbly in providing a cynical and ageing PI to re-makes of 40’s classics The Big Sleep  and Farewell My Lovely,  proving a worthy replacement to Bogart and Dick Powell respectively. Elia Kazan used him to advantage in his moody look at Old Hollywood, The Last Tycoon,  and TV gave him a couple of fine roles in 1980’s epic mini-series like The Winds of War  and North and South.  Both Martin Scorsese and Jim Jarmusch tipped their hat to him by providing small roles in Cape Fear  (1991) and Dead Man,  starring Johnny Depp.

Robert Mitchum straddled the era between the Golden Age heroes of Hollywood, the tough guy that represented an uncomplicated masculinity, and the more vulnerable types that emerged post WWII in the wake of the ‘Method’. Mitchum managed to create a persona that chimed with the times, seemingly happy to play an ‘outsider’ when outsider roles were becoming a key to understanding changing mores after the war had blown away many of the old certainties. His devil-may-care attitude and rebel image, helped by his criminal conviction (overturned in 1951) led to an enduring image, and a stellar career. Not one to promote the ‘art’ side of the business, he nevertheless made some fine films that revealed a thoughtful and engaged mind at work.

Image can be deceiving, as Mitchum was a right wing conservative rather than anti-establishment agitator. An iconoclast in his own way, he had contempt for his profession, his industry and his own talent, summing up his values thusly, “Not that I'm a complete whore, understand. There are movies I won't do for any amount. I turned down Patton and I turned down Dirty Harry - movies that piss on the world. If I've got five bucks in my pocket, I don't need to make money that fucking way, daddy.”  Legend has it he was so cock-sure of making the big time that he told an early girlfriend, “stick with me kid and you’ll be farting through silk”.  While Mitchum enjoyed a reputation as a hell-raiser of the first order, he also managed to stay married to the same woman for 57 years, a remarkable feat in any context let alone in Hollywood during that era. A conundrum to say the least.

Mitchum will forever be the movie bad boy, the psychotic preacher, the dangerous man, despite having played some lighter romantic roles very well. Mitchum’s art exists somewhere between the innate intelligence of Burt Lancaster and the animal guile of Kirk Douglas, his presence and charisma took him a long way, even if, like John Ford, he had a poet’s heart that he was at pains to deny. His legacy is fated to be that of a man with H-A-T-E tattooed on the fingers of one hand, and L-O-V-E on the other, the elusive truth lying somewhere in between.